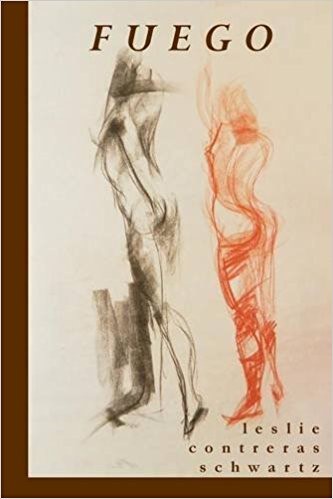 In Fuego, Leslie Contreras Schwartz constructs a world in which the days surrounding and including a birth are a miraculous haze: time stretched into a shapeless fog pierced with bright bursts of wonder and beauty. The children in this collection, whom the poet finds through ekphrasis, other poems, and perhaps from her own experience, struggle with existing within this liminal space: ripped from their familiar places as refugees and immigrants and put in ones that are hostile at worst and at best uncomfortable.

The first poem in the collection is a pantoum, a form that, with its repetition of lines, quickly creates the ambiance in the rest of the book. In “Labor Pantoum,” she writes:

We climb, all legs and hands.
Clutching for each other’s
eyes that we cannot see.
Before I see you, I have met you. (1)

The process of labor, one of both intense awareness of one’s body and sometimes complete blind spots (considering a woman can’t usually bend to see the birth itself as it happens without assistance from a mirror), in the first three of these lines is a confused and fraught one, so when Contreras Schwartz reaches the last line, the whole process is turned. Yes, there is a struggle, but what emerges from that struggle is the wonder of knowing someone before you see them. That the poem ends with that first line reimagined, (“Climbing, all my legs, your hands.” (2)) brings into consciousness this little wonder, this child, now with enough agency to be able to climb.

In her poems, Contreras Schwartz treats this place with kindness, both acknowledging the beauty of it and the insanity of it—is there any other major physical event humans endure that requires the person who has undergone it to immediately care for someone else, much less themself? In “Bed Rest,” she writes:

I watch shadows turn
to light, light to wrists to stomach,

In these lines, she turns time over like a coin in her hand, slowly and without much understanding of how it is passing, because being on bed rest feels nothing short of endless until, suddenly, it ends. She moves through this poem—her hair tangled with wires in the hospital, her daughter watching children’s shows—until she finally looks in the mirror and sees herself warped by her pregnancy, her lips twice as big. But here the poem turns and she recognizes herself “in full bloom, // my body figured / into glory” (15). This moment in the mirror is one of beauty, but it is just that—a moment in a sea of shadows changing to light.

When Contrearas Schwartz’s poems shift away from the inner world of pregnancy and birth, she treats the children her poems encounter with the same kindness and fairness that she treats herself. Children are acknowledged both as capable of experiencing the full breadth of the world, including trauma, while still being wondrous in their resilience. In “Mohammed,” she describes a child who fidgets with his pencils and his words until he’s finally able to write four sentences: a summation of his childhood in Syria where he was both beaten by his teacher and flew kites and rode bikes. After finally capturing this dichotomy of violence and joy, she writes that Mohammed “handed it to me with a grin, chin / turned up, like a gift” (33). And yes, his ability to share his experience, to understand with some certainty that something can be both beautiful and terrible, is a gift indeed.

We get three fuego poems in the book. The first, “Fuego,” comes just shy of halfway through and describes a woman that is not “sitting in a room / writing” but is instead nearly a being of pure energy. The fuego “rains out of her,” her body “alive all at once” (20). This poem refocuses the haze that comes in the poems before it into something sharp and powerful. So, when we arrive at “Fuego II,” we see this same power being bestowed upon Lollie, a girl who, like Mohammed, is able to recapture her narrative through writing. When the speaker tells her that “the classroom has run out, / time is running out,” Contrearas Schwartz turns to Lollie’s body as a monument of her experience:

Her ribs, so sharp
they could cut apart her own skin, her
wasted body of ten years.
Grass smear, smile stain on lips,
fuel burning
full, every single ash sears.

Fuego as in fire. As in energy. The people in these poems gain their power when they can acknowledge the trauma around their narratives, when they can see their bodies—anywhere from sharp and young to swollen with making another human—as wholly their own.

The third fuego poem, “Fuego Revisited,” is not the last poem in the book, but I want to end looking at it, because it brings these narratives together. The speaker is writing on the board, teaching, when she pauses on the word “stationary”:

Station, the place of no movement,
where one waits, a master of post,
this place of fire. A vehicle of panic,
we are transportation. (39)

These poems both stand still and lean toward movement. They acknowledge that they, like the children’s, writing are both “vehicle[s] of panic” and “transportation” toward, hopefully, some greater beauty and light. Even if that light is self made, is fire, is fuego.

Elizabeth Deanna Morris Lakes was born in Harrisburg, PA and has a BA in Creative Writing from Susquehanna University and an MFA from George Mason University. She has appeared or is forthcoming in The Rumpus, Cartridge Lit, Crab Fat Magazine, SmokeLong Quarterly, and cahoodaloodaling. Her name is a line of iambic pentameter.