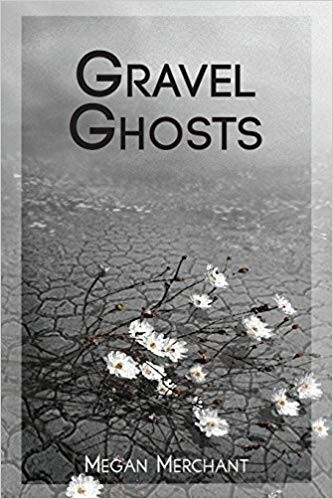 Gravel Ghosts is a hauntingly beautiful book that exposes us to the sparseness of the Mojave Desert – an unforgiving, brutal landscape – as well as the moments of deep beauty within it. In this first book, Megan Merchant taps into the tenuousness and paradoxes of life. Her poems probe the loneliness she feels, even when with those she loves. She speaks of the echoes the sudden changes in the weather mirrored her own emotional states. Her sense of living on the edge, in a barren land, lends a meditativeness to her sense of self and her place in the world. And she speaks of place both in its ability to help her feel rooted and at odds with the world around her. This is a collection that is always seeking. As she writes,

By far, the largest presence in her poems is the landscape, even when she is reflecting on herself. The Mojave Desert takes on a looming presence in these poems, both predictable and unpredictable in turns. At times stable, and comforting, because it is a landscape she knows, it can also be the land of flash floods, dangerous cold, and severe storms. The landscape is an invitation to introspection. As she writes, “There is a quiet privacy in desert lightning” (45). After summer monsoons, “Park rangers avoid dirt roads until they / can map what has washed away” (20). Elsewhere she comments of these monsoons that

… all of the words

Throughout the book, we can feel the porousness of both body and landscape. She is fascinated with the body, and intimacy, and how these continually surprise. A rumination on desert rain translated into her fascination with the human body, as when she describes herself as “an inexactness in body, / composed of 80% water, / 20% words” (57). The desert has formed her, and her reflections on herself. The life she explores in these poems is a life very connected to the natural rhythms of the seasons. The fact that these seasons feel different than seasons in non-desert areas is a tool Merchant uses to highlight an overall sense of disconnection. As she says, “My Mojave prefers strays, distance. At least / an hour’s walk for wildflowers that refuse / to give themselves away too quickly” (20).

But the sparseness is not only in her landscape, but in the words she uses to reflect it. There is a sparseness in her words, in her lines. Many of her poems are written in very short lines with only a couple feet per line. It adds to the fragmentary, ephemeral, distant sense of her world. And just as the outside landscape is a mystery, Merchant faces directly the idea that she is a mystery to herself. In her poem “One Hundred-Year Bloom,” she reflects on the fact she can never really see herself the same as others see her. She writes,

How many chances in this life

do you have to meet yourself

as someone else? To come

back to the land where you

were born, only to find,

that you have already left,

… How long has this landscape

These paradoxes are also explored in more subtle ways, as in her poem “Under the Bodhi Tree” in which she considers the idea that all her contradictory actions – avoiding writing, or bingeing on writing; when things work out, or when everything seems at odds – have their root in the same moments. Yet for all the otherworldliness, her poems also fiercely inhabit the world of the everyday. Ordinary life – “library fines, tourists, double parked cars” (16), or intimate moments with a partner, inhabit these often very interior poems. We see reflections on body parts, and reflections on how one feels when one has a cold. Burnt toast, bleach, and hair in a ponytail all give us a clear sense of a lived life and all its details.

And it is this tension, of the interior and the exterior, and how they reinforce each other and resist each other, that forms many moments of discovery in these poems. It is this tension that gives rise to moments that make one gasp in self-recognition and astonishment. In her poem “Marriage” for instance, she writes about how a husband and wife are still discovering “the little quirks” of their bodies, and it turns into a reflection on the sameness of the desert landscape, viewed from their car. But while there can be new discovery, there can also be a recognition that sometimes the new isn’t needed at all. In another poetic rumination from her car, “Nothing, Arizona,” she writes:

A man could die

in this evaporated openness,

or live with nothing to do but

Every time we get a revelation in a poem, we move on quickly to some other focus in the next poem, a recognition that all is temporary, that there’s more in this vast catalogue yet to discover. This is a restless collection. Although it worries over the same ideas like a river worries stones, it does not pause too long on any of them, preferring to move on. In this sense, the river is like a human mind, having trouble finding its own stillness. Ultimately, this continual movement points to part of what her collection seems to be doing – seeking a pattern, a significance, a purpose – to the daily movements and interactions of our lives. As she muses, “It is emptiness left asking empty of what? which is the only way / to be full, loosely connected like a swift-moving acre of water” (39).

The book plays, delicately, with the idea of emptiness, from Buddhism, and the paradoxes that one must work through as one seeks to find everything in emptiness. But it also plays with the Christian traditions of saints and prayers as well. I say plays with because it treats as a companion, someone to exchange ideas and thoughts with, but does not seem to want to present a dogmatic treatise proposing one over the other. In her poem “Prayer To Our Lady Of Expectation,” she asks Our Lady to

And then she adds, as a storm gathers in the desert,

but most of all,

Merchantis interested both in those who are receptive and those who are resistant. We see small moments of duality?  in the interactions between people in the poems, but it comes across most clearly in her landscape reflections.

Ultimately, this is a collection in which she both grasps her roots and attempts to move beyond them, a book of poems in which she looks to her interior, only to return to the outside again. Perhaps the best way to sum up the paradoxes she grasps lightly is to end with her words about the Greek poet Sappho, of whom she writes,

the beauty of not being

able to throw her arms

Andrea Janelle Dickens has an MFA from Ohio State University and Ph.D. from the University of Virginia. She teaches in the Writing Programs at Arizona State University. Her work has appeared in Thin Air, The Found Poetry Review, New South, The Wayfarer, and Ruminate. In her spare time, she tends bees and a makes pottery.