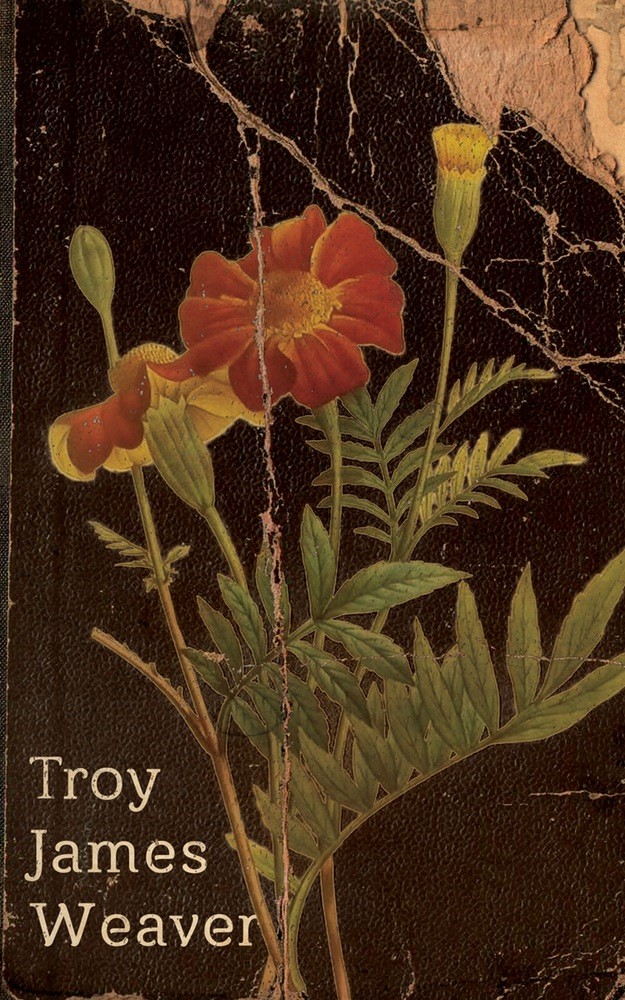 Having survived well beyond the salad days of not getting laid meant I spent my last couple years of college reading a bunch of Raymond Carver and writing stories where two people avoid each other for twelve pages before accidentally locking eyes. I didn’t have the patience for drugs or welding, so that was pretty much what the Midwest had to offer me.

Troy James Weaver’s novella Marigold is a much better take on being intelligent and bored in the modern fly-over states. It’s actualized, for starters. This means he has an actual voice with actual uncertainties instead of the typical over-structured force that strains itself away from clarity or, even worse, a sort of detached, Tao Lin slice-of-life horseshit without the life.

As for influences, it mercifully doesn’t go full-Carver. Instead, Marigold splits the difference between Barry Hannah’s desire to kill everything with passion and Bukowski’s observational, hopeful misanthropy.

The dead speak to me through the mouths of the living—angry customers, each and every one of them. Because an iris or a lily didn’t open in time for a funeral, because the shade of coral was the wrong shade of coral, because the dead can become unreasonable when they no longer can speak for themselves, I get called incompetent, get told I don’t know how to do my job, and sometimes, worse than that, they say they’ll come down to where I work and shove red roses up my ass.

Whereas Weaver’s previous book, Witchita Stories, started strong and got spotty as ideas kept showing up in a reiterated, weaker fashion, Marigold kind of drones on with the suicide theme for awhile before it gets going. Once the tiny sections ramp up and start to build, it becomes uniquely solid. It’s a short book where nothing much happens except a sort of easy endurance, almost as if the plot is the path of an arrow: very straight and fast with a beautifully abrupt stop replacing the satisfaction of an arc.

The other successful books I’ve read in this multiple short-burst style don’t tell much of a traditional story, either. Nevers by Megan Martin and Why Did I Ever by Mary Robison – as well as Marigold – are essentially shaggy dog stories.

In theory, the tiny pieces should offer a different perspective on a larger narrative, an “observed narrative.” They should end up creating a story more in the momentary style of how life is really lived, as if someone did a cut up on a couple months of someone’s day-planner and made them crack wise about it. However, these narratives are relatively flat in comparison to stories in which characters grow, change, or do anything other than consider the conclusions they mostly don’t come to.

Marigold is no different, in that respect. A flower shop worker wonders if he should commit suicide while dealing with a young co-worker who ends up killing himself and then, in an odd revision/alternate-universe version of the events that just transpired, not killing himself. Wondering if someone will die is a traditional enough type of tension, but the micromanagement of the page backhands even that. There aren’t exactly layers to it, just avenues, short cuts, dead ends. There’s wonderment and mystery, and having the form of it directly parallel the overall theme runs the risk of being hokey or dull. Thankfully, Weaver’s got the necessary style to make it work. Beyond that, it’s just magic.

I think of my overweight black friend from work.

What if I took this knife and slit my throat, right in front of you, looking you in the eyes while the blood spurts out of me and onto your face?

Well, I think, I’d grab a bucket and fill it so I could put it all back into you.

Like everything else Weaver writes, Marigold very much is what it is: a dude selling flowers and getting pretty good at barely getting by. The world may be saturated with stories of a white dude not feeling like really doing anything, but Weaver neither wallows in it nor tries to transcend it. There are bills to pay, Tori Amos tapes to listen to.

What we end up with is a whole book, the big damn thing. So, yes, it’s a shaggy dog story. It’s about nothing. But it’s also tempered in a knowledge of how we survive that isn’t exactly informed by why we survive. It’s a rumination on getting through, both the idea that only a fool would ask for more, as well as its opposite: only a fool wouldn’t.

Ryan Werner is a cook at a preschool in the Midwest. He plays an old Ampeg VT-22 in a loud, instrumental rock band called Young Indian. He's online at RyanWernerWritesStuff.com and @YeahWerner on Instagram with pictures of comic books, indie lit releases/excerpts, professional wrestlers, and 1980s guitar ads.