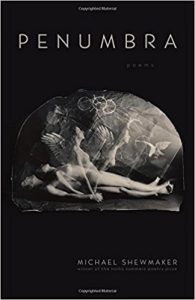 Michael Shewmaker’s debut poetry collection Penumbra, winner of the Hollis Summers Poetry Prize, is a sometimes tense but always rhythmic exploration of darkness in all its forms—not only the edges of our shadowed selves, but also our deepest fears and impulses. “Doppelgänger,” the opening poem, touches on being distant from oneself. A universal theme, this state is grim but all too common, and is made neat in Shewmaker’s precise verse: “Why must he check his pocket watch? And why / must he escort me to my door in his pressed / black tie?” This dissociative element appears occasionally throughout Penumbra, and is one of many factors that give the collection its distinctive, meditative feel.

Shewmaker, formerly a Wallace Stegner Fellow and currently a Jones Lecturer at Stanford University, also explores loss from various angles in this collection. Set in the month of December, “Winter Ghazal” sees the narrator encounter key relationship moments, and we learn that his relationship eventually ends. The narrator’s grief amplifies throughout the poem, until the poem’s radif (a ghazal couplet’s ending word) signifies a grim prediction: “Michael, I’m asked, in which month were you born? / I was born in June—but I’ll die in December.” Words are given careful placement and emphasis here, and the rhyming words preceding the repeated “December” are often complementary but suggest the poem’s overarching darkness. “sky,” “reply,” and “die” are a grim and excellent Qaafiyaa to use, considering their context and implications for the rest of the poem. These rhymes, which in a Ghazal immediately precede the radif, are key to establishing motif throughout the poem.

The poem “The Illusionist” displays an excellent facility with both form and content; here the two follow each other closely, as Shewmaker’s title character performs acts of magic. Playing upon our eyes and our knowledge of rhyme, the poem poses several would-be rhymes that belie themselves upon closer reading, mimicking the magic tricks in the poem. “She knows your card. She levitates. / The coin appears in duplicates,” the hidden narrator recounts. “levitates” and “duplicates” do not actually rhyme as they are used here, though they appear to at first glance. Later in the poem, the narrator reveals his knowledge of trickery just as we encounter an anomalous couplet. Unlike all other couplets in “The Illusionist,” this one features words that look nothing alike, but that actually do rhyme: “you know the limits of the eye, / her sleight of hand, the hidden lie,” the speaker confides. And so we do.

Another example of form and content echoing one another presents itself in “Crop Circles.” Lines circle each other as the narrator discovers the titular objects among wheeling crows and a scarecrow. Eventually the poem leads back to its own beginning: “How strange to find them in the failing dark, / to scan the rows for a trace of answer,” the speaker muses. “The scarecrow points both ways. It hides a smirk. / How strange to find them.” The poem proceeds to lead the narrator around and around (maybe this very motion creates the crop circles?) and entwines this endless circling with a circular form. The scarecrow, deceptive and knowing, perpetuates this motion of both content and form. Thus, this relatively short poem will continue as long as the reader wishes.

Shewmaker’s careful observation of both dark themes and complex forms is again evident in his modified Petrarchan sonnet “The Devil in Grand Saline,” where the narrator overhears a drunk man telling a friend of his girlfriend’s dalliances with the drunk man’s own son. In the poem’s opening octave (eight-line stanza), things come to a head quickly: “‘Cooper, you can quote / me here. I’ll slit that little bastard’s throat.’ / I laughed and ordered them another round.” The poem’s careful Iambic pentameter lends rhythm to an otherwise precarious situation, but luckily the speaker’s generosity seems to defuse things: the belligerent man and Cooper get up to leave. Shewmaker’s narrator muses after them as they exit the bar: “They skipped their tab and stumbled to his truck. // My dear, drunk Abraham—I wish you luck.”

Often the smooth, natural rhythms of these poems elide their form, as in “La Llorona,” where the rhyme scheme (ABA throughout) is masked by enjambment and efficient word choice. The omniscient narrator recounts, “She hears a voice across the water. / And, weeping to remember, gowned / in gray, she can’t recall her daughter.” The rhythm and rhyme persist, as does the title character’s desire to join her drowned child. At the poem’s end, the narrative concludes chillingly, and in perfect form: “She hears the voice. Her only daughter. / They’ll drag her body from the water.” In “La Llorona,” as in so many other poem’s throughout Penumbra, Shewmaker displays aptitude for poetic forms as well as a keen understanding of compelling narrative. I’m grateful for this dark and thorough poetry—it sounds the shadowed depths of being we may not always be aware of, and dredges important lessons to the surface of the mind. I look forward eagerly to the next collection from this talented poet.

Readers can purchase Penumbra from Ohio University Press. This collection also be purchased from Amazon.com and most national booksellers, or at one of Michael Shewmaker’s many readings.

Tyler Robert Sheldon is the author of Traumas (Yellow Flag Press, 2017) and First Breaths of Arrival (Oil Hill Press, 2016). His poems and reviews appear or are forthcoming in The Los Angeles Review, The Midwest Quarterly, Quiddity International Literary Journal, Coal City Review, The Prairie Journal of Canadian Literature, and other venues, and his poetry has been nominated for the Pushcart Prize and the AWP Intro Journals Award. Sheldon holds an MA in English from Emporia State University. Currently an MFA candidate at McNeese State University, he lives in Baton Rouge. View his work at tyrsheldon.wixsite.com/trspoetry.