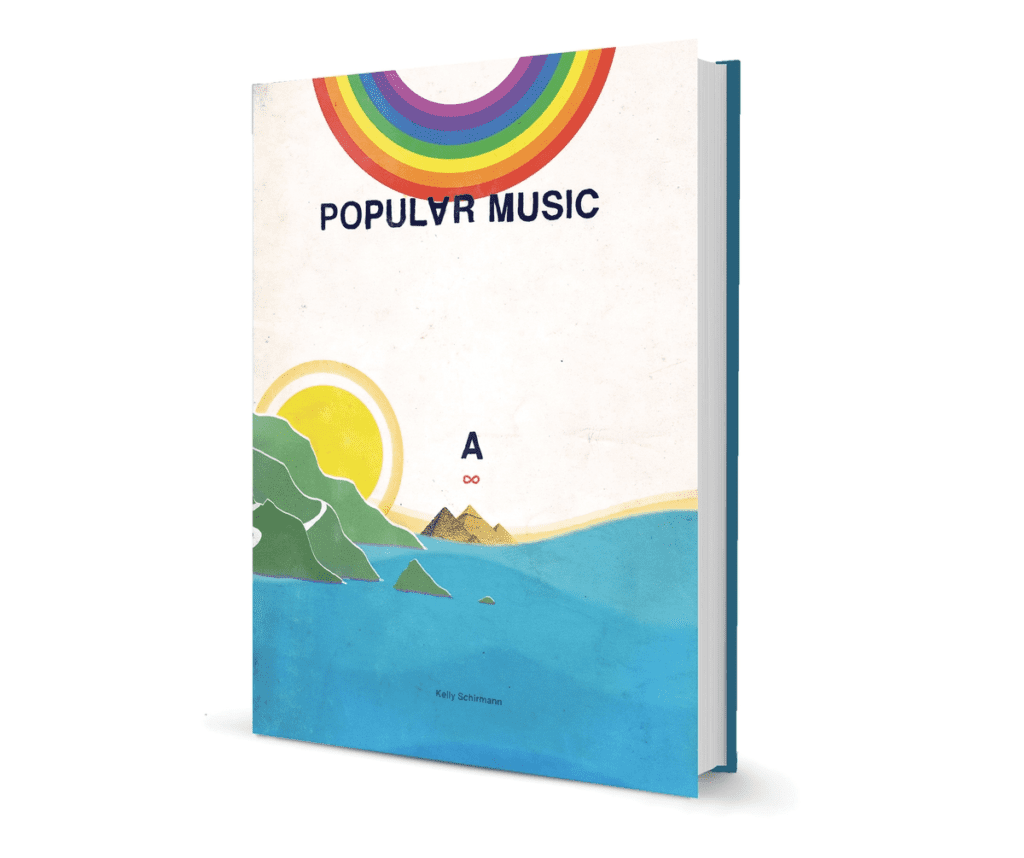 In Kelly Schirmann’s Popular Music, Schirmann examines our culture by asking what is music? She taps into veins running between social media sites, consumerism, childhood, politics, and beauty.

The book’s format is like a song that plays beginning notes, catches an audience with opening lines, moves into the hook, releases a chorus, a crescendo, some repeated sounds, and then builds to an ending. Popular Music uses no titles and very little punctuation. (A good song should be able to be played multiple times.) Bookending the poems, there are three essay-like sections. The first one depicts thoughts on what music is, and how cultures incorporate it into ritual.

The second section is a memoir-like post-college desolate farm stay, where film director Martin Scorsese’s documentary “The Last Waltz” was watched on repeat. This documentary is a live show of The Band’s last concert before breaking up, so the movie streams constant music, discussion about the music, and poignant interviews with the band members. Shirmann writes this: “What I think I found in that film was a resonance, a validation…I was lost, then, in that open field of fear—the one you live in before you can admit to yourself the difference between what your life is and what it might be.” (Section III, page 66.)

The third section echoes Schirmann remembering lines her father humorously sang to her as a little girl such as The Rolling Stones’ “You can’t always get what you want…”: she remembers that to this day.

These sections are so different from each other, yet they all make sense. The poems capture witticisms of the current zeitgeist. These lines feel classic already. Whereas “pop music” has a reputation for being a bit vapid or lacking in critical acclaim or complexity, conversely Schirmann’s lines are so distinct the reader could not finish her sentences even if they were her conjoined twin. Here are some exquisite lines from Section I:

“Do not come around me just to_____ ((discuss your skeleton

It’s pineapple season and I’m very much in love.”))

Better me, please do not internalize the fear that people pass off as sensibility…))

In addition to being widely appealing, Popular Music is timely: Schirmann foresaw this country’s election results with her words on page 21:

“You believe him the way you believe

that in Central America

everyone sleeps in hammocks

alongside warm bodies of water

Information doesn’t need to be true

to grow itself in your body like a peach…”

These words emulate popular music’s frequent undercurrent of dark warning. How apt to write “Information does not need to be true…” in this current political climate, where many people read false news as fact and an un-fact-checked tweet is often considered truth.

Popular music possesses a strong sense of place, but in Schirmann’s book, people search for what makes them whole because their current “place” does not fill this void. Maybe searching for that perfect song to sing at a particular moment reconnects a divided self. We want to sing out during moments of joy or cry to a ballad in sorrow. Shirmann understands that we search for ourselves. These poems take us to the beach where a young girl flies a kite and the male gaze is also present: “women are always caught in a state of performance.” These lines float through airports, ride in the back of pick-up trucks, hike through Joshua Tree National Park, but Shirmann also writes “I love my dad so much it makes me cry,” and “I think of my grandmother in her floral bathing suit/Scooping out frogs with her clean net…” The places are enormous but our relationships are intimate, no matter where we are.

Shirmann concludes: “What I do know is that music is powerful, and that it produces its own kind of energy, which we constantly demand. We ask it to fill the majority of the spaces we occupy—living rooms, banks, bars, restaurants, department stores…I don’t entirely exist unless I shape my body alongside it.”

Songs activate a force inside of us— whether singing in a car or the shower or dancing with friends. It is a shared experience, as expansive as the Grand Canyon or as minute as scraping purple polish off of a fingernail.  Schirmann attempts to translate music’s power, forcing us to seek a deeper connection with our own inner song.

Jennifer MacBain-Stephens went to NYU’s Tisch School of the Arts and lives in the DC area. She is the author of two full length poetry collections and eight chapbooks. Recent work can be seen at Queen Mob’s Teahouse, Sweet Tree Review, The Chiron Review, Sea Foam Magazine, and decomP. Visit: http://jennifermacbainstephens.wordpress.com/.