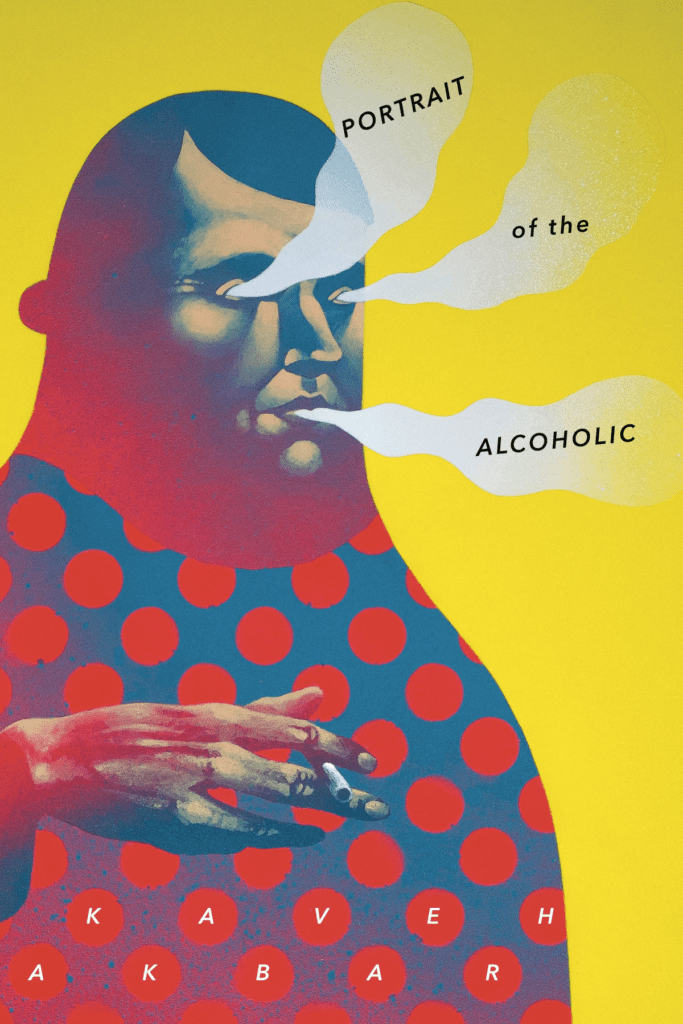 Portrait of the Alcoholic by Kaveh Akbar

tiger sprinting off the edge of

This passage from the poem “Apology” could serve as a stand-alone review of this collection, for this is a book about the naming of desires – for language, for love, for immortality, for God, and yes, for alcohol – a book about seeking always more, trying to fill an infinite, insatiable hole. It is also about the something sacred in our struggles, in our broken selves. The craving is cherished here, treated tenderly, because although it can be named, even tamed, it cannot ever be cast off.

From the preamble poem “Some Boys Aren’t Born They Bubble,” the physical body and the spiritual realm collide as the poem ends:

and that juxtaposition is displayed to great effect in many of the poems that follow. In “Being In This World Makes Me Feel Like a Time Traveler,” the omnipresence of desire evokes the prayer-like sentence “When I wake, I ask God to slide into my head quickly before I do,” noting that “It’s difficult to be/anything at all with whole world here for the having.” God here is a beautiful distraction from the physical pleasures of thirst, of the world, and the speaker’s relationship with the spiritual continues to unfold as he lovingly watches a father in prayer, rips out the pages about Hell in the family Qur’an, pushes the sounds of prayers through his teeth, embraces the craving as a preacher, and calls out to a “bountiful, bloomscattering Lord” as he tries to “once again be God’s own tuning fork.” The poems nod to multiple spiritual paths with direct references to Islam and the Qur’an, the use of Latin titles and, in the final poem, a quote from the Our Father, showing us that this longing is not for someone’s scripted or organized vision of God but a much more personal one.

Yet the hunger is not just for spiritual connection. These are poems deeply grounded in the physical world and the body, especially in the “Portrait of the Alcoholic As…” poems. Here the body is “leaking:/blood and saliva, soft as smoke.” Here withdrawal summons a quiet fox “tiny as a Plutonian moon” when “everything else/was wilding around us/the sky and the wind//the riptides and/the rogue comet/blasting toward earth.” Here the craving is “loudest before bed, humming like a child/put in a corner. I don’t mind/much; I have never been a strong sleeper, and often//the tune is halfway lovely.” Here a slaughtered lamb bleeding out on a porch, a distaste for tomatoes.  Here a thirst that is insatiable,

lonely-as-the-slow-charge-into-a-bayonet/thirst.”  The world is both beautiful and terrible, even a dead man’s stomach contents “a tiny museum of pleasure.”

With the poet’s evident gifts for language, it is fitting that language is another object of desire in this collection. The speaker wrestles with both cataloging the world around him and recognizing the inability of language to adequately breach distance and loss. In “Do You Speak Persian?”, the speaker longs for a language to “make dailiness amplify/and not diminish wonder” while acknowledging “I have been so careless with the words I already have.” And, in the stunning “Desunt Nonnulla,” the speaker’s delight in language is palpable: “I walked learning/the names of things each new title a tiny seizure/of joy,” leaving the reader with the promise “if you teach me something/beautiful    I will name it quickly before it floats away.” The speaker admits “I could not be held responsible for desire,” and this confession never hits a false note. In the final poem, “Portrait of the Alcoholic Stranded Alone on a Desert Island,” he realizes there will never be an easy remedy for desire, that we will wrestle with it as long as we exist in the physical world:

“Our father, who art in Heaven–always

just stepped out, while Earth,

It all just means so intensely: bones

on the beach, calls from the bushes,

the scent of edible flowers

floating in from the horizon.

I hold my breath.

The boat I am building

will never be done.”

This inextricable weaving of the temporal and the spiritual reminds the reader that, although both desire and God are ultimately unnameable, invisible entities, we give ourselves over to them again and again, knowing we may never be sated. With these poems, Kaveh Akbar opens a door to the heart of this longing. The heft and height of it. What a gift.