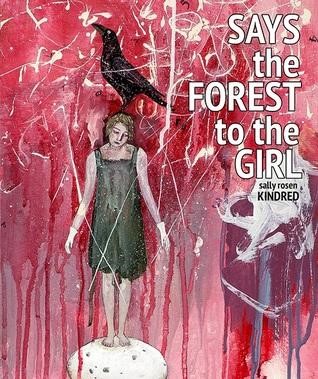 Says the Forest to the Girl by Sally Rosen Kindred

If what Bruno Bettelheim argued in the 70s is true, that children need fairy tales in their original dark forms in order to cope with reality, it must be true that adults need those fairy tales as well[1]. We who’ve shed our seed coat of innocence and know more of the world’s harshness, including the inevitability of old age, illness, and death, seek outlets for expurgating our horrors. Sally Rosen Kindred’s new chapbook answers the call: it is a slim volume of haunting fairy tales for grownups. It includes a cast of crows, wolves, a talking forest, and familiar characters like Little Red Riding Hood, Sleeping Beauty, and Rapunzel. In a blend of persona poems and poems in which the speaker is more nebulous, these characters speak versions of their truths.

I was expecting fairy tale and a certain amount of gore from the title of Kindred’s collection, combined with the cover image (a forest composed of blood-like red runoff surrounding a young woman with a crow perched on her head and a large egg beneath her feet). What I did not expect is the subtle narrative of illness that threads throughout the chapbook and binds it together. The second poem, “Little Red,” opens with the lines:

To treat it, the doctor said, we don’t need a name for it. I picked up my basket, put her white coat inside. Folded, it smelled wild, gristle in ice. Lupus, Lyme, rheumatoid arthritis.

The rest of the prose poem worries the idea that the speaker’s disease doesn’t have to be named, as the doctor insists, but indeed Little Red can’t help obsessing over naming it, calling out in nursery rhyme fashion, “Lupus, lupus, Lyme. We don’t need a name.” Not naming the disease makes it more insidious, means it could be anything, even “Crumbs of light.” “It could be the wolf. It could be the moon.” The speaker dreams up a Huntsman-rescuer who “comes with an axe of names.” Lupus, latin for wolf, is an autoimmune disease that occurs when the body’s immune system attacks its own tissues and organs (Mayo Clinic). The body becomes its own enemy, harboring wolf. The wolf remains prevalent throughout the chapbook as a symbol not only of death’s larger threat, but of illness and its elusive namelessness. By the end, the speaker, an older, wizened Red, walks side by side with the wolf to the house where her next body lies. She wonders:

What is it that waits
inside her, a nest
or a knife, a huntsman
or an open door?

Apart from the wolf, another motif that conjures death and illness in Kindred’s chapbook is sleep. In the stunningly musical and sinister title poem, the forest speaks convincingly to the girl, enticing her to surrender to its dark loam:

Want your sleep’s thick
castle, its fruit-weight
to fill me.

Will tell you a story if you’ll just lie still.

The talking forest sheds pronouns in favor of a more menacing omnipresence. Verbs are anchored to white margin on the left and vague threat on the right. This is the forest that swallows mothers, that has “made a black soup for your singing mouth.” It labors to persuade the girl to “Climb / in. Lid to root. / Am singing you down.” Absolutely chilling.

In other poems, such as “Sweeping,” the speaker regrets the body and its limitations, wishing there were a sill she could sweep her decay and dust from, but:

Your body’s no threshold.
You wanted
a world without dusk.
But you sink with each stroke
into dusk’s filigree

No matter how we might wish to avoid illness, pain, the passage of time (“This witch-dance that blankets the hours / how close it’s taking you / to heaven”), these things are ultimately the dusk we are all sinking towards. Kindred’s sharp ear, her heightened musicality, and the dream-like slippage of her lines will lure you right in and won’t loosen hold.