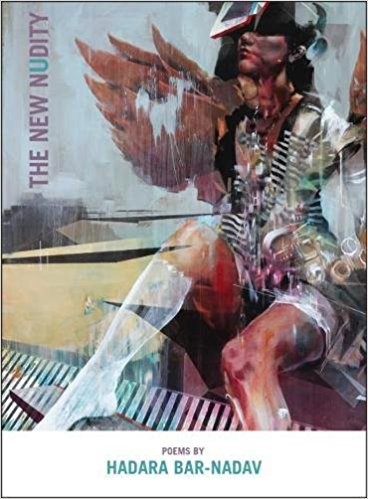 The New Nudity, by Hadara Bar-Nadav

Hadara Bar-Nadav’s newest poetry collection The New Nudity is a fascinating study in connotative definitions—this sometimes-ominous book explores the darker sides of everyday objects, and also what our perceptions of them say about our own lives. Bar-Nadav, last year’s winner of the Lucille Medwick Memorial Award, is a professor at the University of Missouri at Kansas City, and she brings her keen academic’s sensibility to these erudite poems. Bar-Nadav imagines the lives of the common items detailed in The New Nudity—lives that have colored our own for longer than many are probably aware.

This collection’s solemn, even elegiac tone is established immediately, in the poem “Thumb.” Bar-Nadav sees the humble digit as a stoic mourner of sorts: “When you think of the past you form a fist / until a heart beats.” The speaker sees the thumb as a microcosm of ourselves, an uncomfortable realization. We too “lean to one side. Detached. Distant from all others” (3).

Bar-Nadav hints gradually through other objects—which are often these poems’ narrators—at a heavy past that may in some ways reflect her own. “Telephone Pole” is tantalizing for the stories it might tell us, and for those explicit on the page: “I once held / the lips of a thousand // sleepy lovers / too far away to meet,” it confides. “Words for always / bitten in two” (11). What tragedies has this ubiquitous sentry seen? This poem carries a wistfulness along its length, but also a feeling of deep sadness: hallmarks of one who has been through darkness for far too long.

Later a similar structure reveals its secrets. In “Spine,” Bar-Nadav shows the immense weight we foist upon our own unseen foundations. We stay resolute despite ourselves, she suggests, and despite the world’s crush. The poem intones: “Bone ruffle, // hold up the sky of myself.” In these three lines humans are made both elegant and vast, a brief contrast to this book’s ominous tone. Indeed, though we may be elegant, we are also fragile, like the spine itself: “cloud after / cloud on a string” (17). We see here that if the self is sky, the spine is also, and thus the sky is reflexively supported. The poem’s end suggests a less optimistic end result: when we collapse, we fall wholly, down to the very “spire / of [our] crumbling” (18).

Our connection to the world’s objects is without limit or end, as Bar-Nadav asserts in later poems like “Bridge.” We live in a linguistically constituted world—language, beyond merely framing existence, might actually create it—and the poet recognizes this acutely: every bridge is “wire spokes / through speech” (38). In another vein, “Tweezer” explores onomatopoeia, its name the suggestion of a lethal electric hum. This poem declares, “I could kill a man. / … I am forever / severed, two-headed.” Tweezers, “Merciless[, m]ercurial,” are also the bringers of small salvations, as when they extract a glutted tick from an unnamed figure’s thigh later in the poem (48). Objects, even through their names, shape our shifting reality.

At their very best, the poems in The New Nudity are replete with personality. Though an external perspective is surely necessary for many of these objects, the strongest moments come when we hear from the things themselves, such as a plant that wastes no time in setting the reader straight: I am a plant, it argues, “[w]ho is no one’s pet and / will not be touched. Ever.” Its fierce independence makes this leafy entity exceptionally memorable among a collection of already striking objects and beings: “From the start / a volatile symbol” (“Plant” 60).

Toward the end of collection its focus turns inward, to the poetic essence of the body and soul: the heart. Bar-Nadav acknowledges the irony in this choice of focus: “a bad word / in a poem, smutmouth,” the speaker concedes. The heart is so much more than cliché, though, when viewed as an entity unto itself; it is complicated and flawed, as we are. “You sound like / a limp,” the narrator tells it. “a little ghost / and its echo” (“Heart” 78). Exhibiting strength despite (or even in concert with) fragility, like so many objects in these poems, the heart finds its subtle way.

Readers can purchase The New Nudity from Saturnalia Books. It’s also available from Amazon and most national booksellers, or at one of Hadara Bar-Nadav’s many readings.