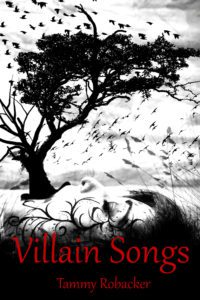 you were not a crowd

as much as a culprit.

Isn’t it taboo to sing of—to name—our sexual abuse? Aren’t the wronged supposed to be quiet and deny or forget about it? After all, the abuser is the one whose privacy and feelings are usually protected – especially by the family. Tammy Robacker’s second full-length poetry collection Villain Songs is a book that confronts the dark secret of a family perpetrator, and in its telling, gives voice to our tales of abuse. These poems tell us to protect ourselves from other villains who weave their shadows and ominous presence through the speaker’s girlhood: sexual trauma, male oppression, street harassment, and other myriad subjugations women and girls endure.

In Villain Songs, our portrait of the villain is constantly changing. Is it the perpetrator who grooms the girl-child speaker in the memory poems? Is it Medusa? Is it a catcaller on the street? Is it a parent who puts her child in the hands of a caretaker that takes advantage of them? Is it a shifty parakeet that always watches the abuse, but doesn’t ever help? And don’t the mistreated sometimes become the villains in their own tragedies?

These questions are important to consider as, by definition, “villain songs” are usually a theatrical performance, sung by the bad guys to boast about how evil they are, flaunt accomplishments, and taunt enemies with their maleficent plans. In Villain Songs, Robacker cleverly turns this concept around. As we read poem after poem, the mythology of villainhood is demonstrated at times and also questioned, examined, refuted, and spun.

The speaker in the beginning group of poems in Villain Songs is a young girl caught in an abusive situation, intact on the outside, but terribly wounded on the inside. She projects her pain onto her doll. The doll becomes her. “You would always feel the hurt, / followed by the hollow. Searching // for something to satisfy” (“The Changeling”). The speaker survives at the price of carrying the shame of a secret history.

But eventually the speaker makes a crucial decision, that she will not be a victim. As she says in “Proud Flesh,” “I will only carry the living wound / to here.” The speaker likens the process she’s undergone becoming a new person to kintsukuroi, the art of repairing broken pottery with lacquer mixed with powdered gold, silver, or platinum, “how the Japanese celebrate the broken.” Her losses have been transformed into “shards so refined they will glitter / and shine a new path.” The result is a brand new person, more beautiful for having been repaired.

The poems begin to expand in scope. Instead of gazing inward at self, naming private transgressions, Robacker looks at more public incidents of sexual trauma, more villain songs. For example, the poet takes on the persona of the snake-haired Gorgon woman who freezes men at a single glance in “Villain Song for Medusa,” saying, “Sometimes the green monster in me / still believes it’s a bud-pink maiden.” After all, the Medusa was also abused by a male: “[F]irst bloom plucked in Poseidon’s sea. / His seduction, my miserable opening.”

Sexual abuse must be confronted, must be sung about, in all its permutations. For example, the container-shaped poem “Another Girl Goes Down” addresses truckers who chase a girl on her bike, pushing her into a ditch. “Maybe she’s only twelve….” A poem describes a hometown simply called “here,” a terrible place many women can relate to, a place where “the men are mean” and there’s “[a]lways something horrible burning out back.” And yet, this place is somehow frighteningly ordinary (“Burn Barrel”). The uncomfortable poem “Hole” recalls a time the speaker was a college student on a bus and a man standing in the aisle kept rocking his pelvis against her. And the sad, evocative poem “American Eagles: A Totem” bears witness to a Catholic orphanage for Native Americans, now being demolished, where the students were sexually abused.

Robacker’s poems are short and concise, yet dense with meaning. These seemingly simple poems contain layers of imagery, word connotations, sound effects, and other poetic fireworks that only get better upon multiple reads. This poet is a connoisseur of the exact word. For example, the following language describes the theme of innocence with a young girl sitting in “her church dress.” It not only conjures up a rich picture in the reader’s mind, but resonates with fragility as in the poem’s title, “Hymen”:

The masterful conciseness, imagery, and word choice make this poem and others in Villain Songs powerful poems of witness, real and raw and altogether compelling.

In Villain Songs, there are many types of villains, some more evil than others. These poems remind the reader that villains can appear vastly different depending on who’s telling the tale. Often the “villain” in the poem is constructed like a hero. But whom does this villain/hero save? Don’t we sometimes have to save ourselves—even if this makes us into a villain?

Villain Songs is on fire. It shines a fierce light.

Signed copies of Villain Songs by Tammy Robacker can be purchased directly from the poet and are available on her website: http://tammyrobacker.com/