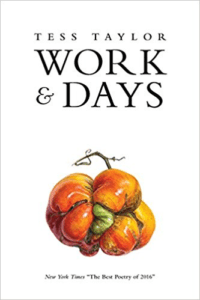 Work and Days by Tess Taylor

Tess Taylor opens her latest collection Work and Days with an assertion that “To miss even this springtime/ would be an error.” The poems in the book chronicle a year of working on a farm in Western Massachusetts, during the 2010-2011 growing season, shortly after the narrator’s miscarriage. The farm is partly an escape and partly a reconnection with a simple present – with cucumbers, frogs, and stones. Meanwhile, in the background, hover global warming, far-off wars, and social injustice.

The narrator returns throughout the book to the theme of time and impermanence as she watches one season bleed into another, with the poems toward the end making these themes most effectively clear. In the poem “Apple Buttering,” for example, a neighbor leaves a bag of bruised apples by the door with a note saying to use them or toss them. This poem contains one of the most surprising moments of the book, in which Taylor leaps from considering apples to describing surgeons digging up graves, who “pare the rotten and the botched.”

Taylor and her coworkers save what they can of the apples, working against the rot and worms:

Each cheek is a brown semaphore: rot, rot.

Worms wind through. The rest stews in the pot.

As we slide, the day hovers.

Soon, it will not.

A larger impermanence, that of environmental catastrophe, is brought forth in the “Apocalypto” poems, which meditate on extinction and global warming. These concerns make the struggle to appreciate “time on Earth” all the more pressing and certainly sadder.

Many poems also concern themselves with a nagging question about privilege and the uses of the pastoral. Taylor is clear that as she revels in identifying frogs and eggplants, war and famine rage around the world. Her answer for the uncomfortable question is muted. Global problems pop up – as in the poem “Elsewhere Flood”  where she describes “Rainforest clear-cut for pasture” and “A pregnant woman inhaling sprayed poison” – and then disappear in favor of the immediate present. About two-thirds of the way through the book, she asks the question most openly, in the poem “Apocalypto for a Small Planet”:

don’t bother this is naval gazing

& my friend at Yale says my hunger

to be near zucchinis

will not save the planet from real hunger

except I remember in the film on gleaning

when the priest in his compassion says:

those who glean now out of spiritual hunger

also should be fed.

Taylor sets up a dichotomy between spiritual and “real” hunger, and then returns to the cucumbers before her. Her awareness of the injustices that surround her year on the farm is an important component of the work, but it also makes me wonder what other strategies she might have used. Western Massachusetts is not without poverty and Many of the small towns near the farm where Taylor worked are economically depressed. What would the book look like if she had reached to the world immediately outside the farm for a reckoning with privilege, rather than imagining global problems as “elsewhere”?

This type of investigation would likely have changed the structure of the book, and perhaps its relationship to the pastoral, which imagines the countryside as far from the problems of court or city life.

All that said, Taylor’s efforts to be present in a place, with the fruit, dirt, and stones in front of her, offers the reader numerous pleasures, not the least of which is her skill with language. “Apex. A throaty world sings ripen,” she writes in “Solstice (Lake).” In “Bright Tide,” we are given the assonance of “Warm furzed blur of dust & buzzing.” If she reaches somewhat imperfectly towards what she calls “not self but species,” it is certainly a reach worth reading.

Megan Alpert is the winner of an Orlando Prize for poetry and a finalist for the National Poetry Series for her manuscript The Animal at Your Side. Her work has appeared in Harvard Review, Sixth Finch, Denver Quarterly, Contrary, and others. Her journalism has been published by The Guardian, The Atlantic, and Foreign Policy. She received a reporting fellowship from the International Women's Media Foundation.