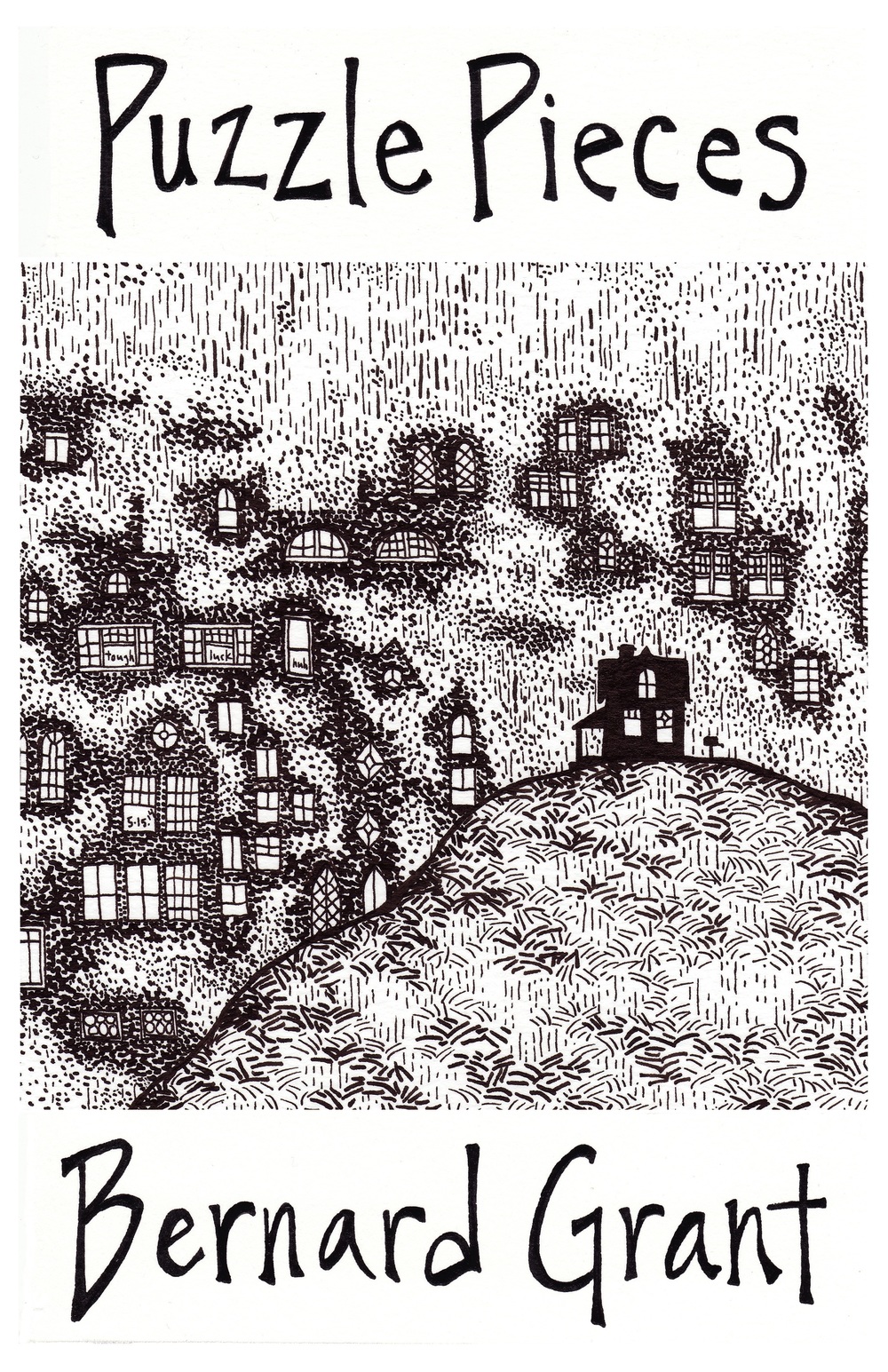 When I opened Puzzle Pieces, Bernard Grant’s slender chapbook of spare, short-form lyric essays, I underestimated what twenty-six pages of prose could do. I thought I’d read for an hour, make notes, read a second time, and finish this review by mid-afternoon.

Suddenly it was 9pm, and I hadn’t even started writing. I’d been going back to Puzzle Pieces all day, fascinated by its layers of identity, sound, and structural intricacy. Grant in a small space encompasses race, ability, class, family, violence, art, and self-doubt. He also happens to be a twin, which further complicates his search for the elusive human grail: how to be an individual, but also how to belong.

Grant’s identities are sometimes violent and cruel, while others are subtle, though no less devastating. Throughout Puzzle Pieces, new identities enter, and the speaker is unsure how to fit or reconcile them with the old. Grant suggests through the titular piece that each person is like a puzzler sitting at a table and shifting pieces around, trying to discover how she or he is meant to fit together. The problem, however, is that no one knows what their puzzle will look like when it’s done.

The same confusion in no way characterizes Grant’s approach to structure. Rather, Puzzle Pieces creates order from chaos as it mirrors the speaker’s evolution. The early essays demonstrate the fragmentation of an adolescence characterized by drugs, music, and danger. The middle of the book coheres into more traditional prose as Grant discovers that his wholeness, his home, is in language, even as he struggles to make sense of the child he was and the writer he is becoming. Toward the end, however, as Grant’s health takes a sudden turn and his identity develops another dimension, the essays evolve into another iteration: time and experience bend back on themselves, helix-like.

Uniting the pieces is an engaging voice—by turns intimate and restrained, contemplative and angry, curious and lonely—that pulled me in, again and again. Grant’s indebtedness to music is also apparent; when I searched for a remembered phrase or sentence, I found myself rereading the entire piece for its pleasures of rhythm and word play. In “Repeated Cycle,” one day bleeds into another, and words echo the empty loop of existence: “Not yet. You’re not at work, which means you’re also not dressing and cleaning grown men who play with toys and piss themselves. Not yet. Now you’re waking up with the sun.”

Perhaps the most extraordinary shift in these pages is the speaker’s move from caregiver to a person who needs care. But even before the body changes ability, Grant is preoccupied with mortality and the body’s vulnerability, particularly because his is a black body. The opening essay begins with two men who try to “teach a lesson” to Grant and his adolescent companion; his body later becomes injured at a hardcore show; and we learn that Grant’s birth nearly resulted in his death. The body, it seems, is rarely safe and never free from a crush of forces.

While such strife might turn someone into a misanthrope, the opposite is true here. Puzzle Pieces is filled with the less fortunate: an IHOP cook who’s just finished some jail time; “a skinny teen mom, moonlighting as a stripper and a coke dealer;” a man whose arm is withered from polio. All of these are people from whom the speaker doesn’t expect care; indeed, they are the ones most in need of care themselves. And yet, these individuals offer kindness to each other and the speaker. Humanity, Grant suggests, is found among the most desolate and the most overlooked.

That word, “overlooked,” contains another of the book’s profound ironies. The cover illustration of Puzzle Pieces features a small house situated on a hill. The house overlooks many other houses—not from a position of authority, but from a place of quiet dignity. The other meaning of “overlook,” however, contains a decidedly negative connotation: to survey in such a way that your gaze passes over what is immediately present. Bernard Grant insists on confronting both kinds of overlooking—in himself and others. The result is a deeply affecting reading experience that will make you reconsider your own observations, your compassion, and your all too brief life.