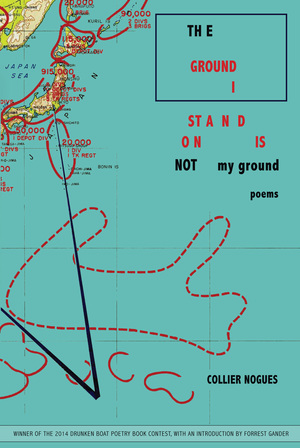 Collier Nogues explicitly states that the typographical erasures comprising her award-winning The Ground I Stand On Is Not My Ground (un)embody an attempt to answer the following questions:

How did a military base in a foreign country 7000 miles away from our previous home in Texas seem to my mother like a good, safe place to raise a child …? Why were there so many other American families, living in such well-developed suburban infrastructure, on Okinawa 50 years after U.S. soldiers first arrived there during the Pacific War? Who paid, and who is still paying, for my sense of safety there, and in what currency?

Nogues’ canny selection of erasure as vehicle to address these issues allows her to (un)layer irony, the universality of aggression, and power redistribution, via her selection of dazzlingly diverse source-texts, each (at least) tangentially related to Okinawa, so that the serial colonization of this region becomes a microcosm of the post-Pacific War occupation of Japan, which itself a single example in the commentary on aggression woven by Nogues’ re-contextualization of words and letters from those underlying documents.

Consider, for example, “News” in which four articles (spanning a 21-year period) documenting US military anti-mosquito insecticide experiments carried out on Okinawa are erased to be re-read as the securing of an area against (in)human enemies. “Success is dependent on surveillance / and control // fair or not // and can get out of hand,” Nogue eerily writes. We can look closer (intraspecies) in “Across the Plains” for an investigation of the universality of deeming the other as enemy, in the erasure of Robert Louis Stevenson’s 1902 recounting of anti-Chinese sentiment in the USA, which Nogues has reconstructed as “a priori / enemies, vermin in the throat of resem- / blance. // We were lost as far as decency, // bodies / delicate strips in a boat without cover.”

With intentional irony, Nogue’s use of erasure mimics censorship both as a result as wartime strategy and that of victor-authored ‘historical’ records written in the aftermath of conflict. In “Examination and Discovery,” documentation of the British empirical navy’s early 19th-century ‘voyage of discovery’ into Okinawa and Korea is twisted back on itself through erasure into a description of post-war censorship in Japanese textbooks, in which the eradication of nationalistic phrases that had been there leading up to and during the war confounds young students, who are charged with blacking out phrases deemed (suddenly and without explication) objectionable. The poem says, “…the required marks were to / teach us our future” and ends with “and denied any knowledge of war.”

Erasure as a form of protest is hardly new. While it is fascinating to focus on how Nogues is driven to retroactively redistribute power in response to a sort of modern enlightened guilt, taking, for example, the horrific anti-Semitic rants of Ezra Pound’s infamous Radio Rome broadcasts and repurposing them into “Radio Speech,” a poem that Pound most certainly wouldn’t have approved of, it is important not to overlook her craft as demonstrated through careful and often ingenious word choice. The death of soldiers in the ending lines of “The Americans in Japan” is described in words that would have been just as heartbreakingly effective if the entire lexicon rather than a limited source-text had been available to the poet:

All of this rose in the steam, every
marine and his grave
moving up from the surf-whitened
coral shore, up the surrounding hills
reddening up above the tops of trees
and after having paused a while to
close their eyes
they passed into new colors,
gold and silver, brassy gray or yellow,
gathered at the top of the fields
and passed through the sharp-eyed
hills
to the interior.

Likewise, Nogues’ lyricism effectively echoes and bolsters the points made by the clever choices of her source materials. In contrast to Travis McDonald who has said, “For my own part, the act of erasure leads toward the discovery of otherness,” Nogues pointedly shows how historically jingoism and the insistence of otherness on a national scale has led to monstrous acts of which no society is innocent, and thus tragically and ironically no nation is other. For her, erasure is a way to emphasize the illusion of otherness, which she does by repeatedly choosing from her many source-texts the mention of body parts with which all humans can identify: hand, legs, shoulders, tongues and skin, and the echoing repetition of red and scarlet, which the reader from early on learns to identify with blood. The word ‘form’ is selected repeatedly, for the same effect, as here in “A Book of Patriotic Movements”:

However great a man appeared leaping form
determined form
the clear bright form
the sound running underneath was
the close press of bees
carried out
by the hand of a form the same as his.

Nogues demonstrates breadth, delving also into the psychological effects of war, by repeatedly erasing in “Dear Grace” the same source text, a memo from Assistant Attorney General James Rowe, Jr. to President Roosevelt’s secretary in 1942 concerning the “Japanese situation in California.” Each successive erasure becomes an increasingly and alarmingly incoherent letter home from a serviceman, allowing the text to simultaneously condemn both what was done to certain citizens left behind at home (as the source-text) and those sent abroad to serve (as the erasure).

Readers should be aware that to read only the hardcopy volume of Nogues’ text is to miss the ghostly experience of the corresponding digital art, in which each erasure is linked via QR code to an online page where the reader’s mouse can hover above the source-text, appearing only a few lines at a time, then disappearing as the mouse and gaze drift away, much as experiences and testimonies of individuals disappear or are disappeared in war. Luckily Nogues is here to insist (in “Stories I Hear”) that our gaze not drift away, that we are responsible to “a world which wakens / faint // billowing and fluttering— // the million / million deaths within hearing.”

Jessica Goodfellow is author of Mendeleev’s Mandala (Mayapple Press, forthcoming 2015), The Insomniac’s Weather Report (Isobar Press, 2014) and chapbook A Pilgrim’s Guide to Chaos in the Heartland (Concrete Wolf, 2006). Her poems have appeared in Best New Poets, Verse Daily, and The Writer’s Almanac. She is a past recipient of the Chad Walsh Prize from Beloit Poetry Journal. Possessor of a graduate degree from Caltech, she lives and works in Japan.