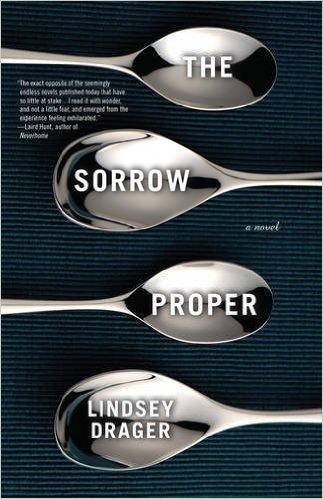 “There are only two ways of managing grief: either it is overcome, or it is not,” claims the deaf mathematician in Lindsey Drager’s debut novel, The Sorrow Proper.

Throughout the book, characters try to cope with loss and navigate the labyrinth of grief. Three intertwined stories unfold across nonlinear narrative. It reads like a collection of flash fiction that’s arranged in perfect chronological disorder. Four librarians fight to keep their library open; two parents struggle to deal with losing their daughter; a lovestruck photographer and deaf mathematician wade through the grief of each other’s death. Yes, they both die and both live.

The novel plays with the idea of “fractured future,” of multiple coexisting realities. These realities start at the beginning of one’s life, then grow to many separate endings. Like branches on a tree, they stem from the trunk to infinite directions, leafing inevitably to infinite deaths. The deaf mathematician explains it best to her lover:

[F]or every decision we make, all the decisions we don’t are being carried out until the future branches forward so complexly that … every singular line births thousands more and at the end of each line is a death so that we are dying always, everywhere….

It’s a fresh take on previously covered ground—think Borges’s “The Garden of Forking Paths.” Drager applies the “fractured future” idea mostly to the photographer and deaf mathematician’s love story, showing us the different ways that losing each other maims them.

For the Bronsons, the parents who lost their daughter, Drager shows us no world in which the young girl lives. In each retelling, the car lurches through the crosswalk, and the Bronson girl falls to the pavement. I have to believe, even if it’s not shown, that there is a world in which she’s hit and lives—and one where she isn’t hit at all. Otherwise, the multiple worlds idea is not sound.

For the four hard-drinking librarians, Drager gives us an ending where the library is lost in the process of being saved—and maybe saved despite being lost. It depends on your definition of the word library. The deaf mathematician wonders if the library is “the building or the books?”  She slips a librarian this comforting note: “It is a mathematical certainty that there exists a world in which the library will never close.” That’s the only world they want to live in, and they fight to make it so. To draw patrons, the librarians sacrifice sections of shelving for a coffee bar, a computer section, anything that will get people in the doors. But can you still call it a library, they wonder while sipping from pints and shot glasses, if you have to remove the books? It depends on your definition of a book.

The Sorrow Proper provokes plenty of thoughts, but at some points, the ideas seem to develop faster than the characters. The character we learn the most about, the deaf mathematician, loves the library, teaching at a deaf school, taking baths, and collecting spoons, but we don’t know much else. Sometimes I read a book and think that details could’ve been omitted or compressed, but with The Sorrow Proper, I thought the exact opposite. Following multiple storylines into alternate worlds in roughly 25,500 words can’t be easy. It’s a nearly epic-size tale with a novella-length word count. Which seems to be as much a walking contradiction as the photographer and deaf mathematician both dying—and living.

Perhaps trying to criticize such a good book makes you a little unhinged. Perhaps you need to disregard the minor quibbles and focus the many great parts or else you’ll go crazy. Perhaps it’s really as easy as the deaf mathematician claims: “It’s simple to stay sane—you just forget.”  But first you have to read – and remember.

James Figy is a recovering Hoosier who lives in St. Paul, Minnesota, and a graduate of the MFA program at Minnesota State University, Mankato. His creative work can be found in Hobart, Midwestern Gothic, Cheap Pop, and the anthology Bad Jobs & Bullshit. Check out the Fail Bet-ter interview series he runs for Fear No Lit, and follow him @JAFigy.