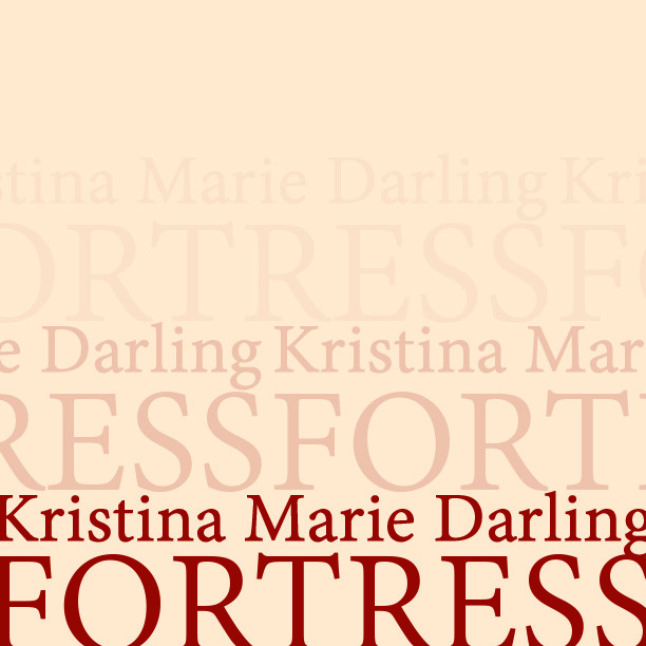 In his 1917 essay “Mourning and Melancholia,” Sigmund Freud examines the human experience of grief. Whether occurring in response to a real or imagined loss, he writes, “In mourning it is the world which has become poor and empty; in melancholia it is the ego itself.” Regardless—or because—of how it inhabits the conscious and unconscious minds and how it may come to distort perspective, grief has its own creative powers, its own desire to make sense of the conditions that gave it entry. Deeply in mourning, Kristina Marie Darling’s fourteenth book, Fortress, busies itself with the task at hand: to rebuild the world and refuse the pull of melancholia.

Hyper-focused and elliptical in its attentions and intentions, the book obliquely reveals itself as an obsessive meditation on marriage, addiction, and loss. The bulk of the text is arranged into four books, themselves further divided into subsections or “Minor Plots.” Book One introduces unnamed characters, opiates, Persephone, “a photograph, a set of keys, and the silver ring on my finger.” Recurring motifs invoke the fantasy many post-Industrial Revolution lives are built upon, driven and upended by. Whatever the means—marriage, drugs, or religion—attaining the state of “happily ever after” is to occupy an ever-shifting terrain:

It was no longer about marriage. The dead flowers and their opium dust had become a test
of will. I could already feel the most startling numbness in every fingertip. That was when I
began to pray.


In Books One through Four, the text is flush with the bottom margin of the page, reinforcing moods of confinement and isolation. Yet the speaker is seemingly imprisoned less by external circumstances than by internal obstacles. Within the landscape she describes, she moves freely, materializing or disappearing as if always on the edge of waking or dreaming. Sometimes she is in a house, sometimes she is picking the locks and departing, sometimes she is arriving: fractured, her journey involves casting back as much as it does moving forward. The addition of parentheses and footnotes creates a multilayered persona and text, as full of asides as it is of omissions:

5. An early documentary, which follows its heroine through the aftermath of an addiction.
She mentions a country landowner (at one point described as her “beloved”) who furnished
her supply of the pristine white pills.


In Book Two, the text is footnoted, and pronouns further complicate the narrative. Both love objects, both destroyers: “he” signifies both man and drug. Add silver spoons, dead poppies, Keats and Sartre: “Needless to say, there would be no survivors.” By Book Three, however, the narrative’s cyclical qualities become more pronounced. Footnotes abandoned, it seems the speaker has left the relationship. But whether this is a relationship with a man, a drug, or a man on drugs, Fortress’s nameless speaker can never successfully divest herself of these agents, toying as she is with bleak surrender:

What is there left to say? When we married, I became his wife. I can no longer remember
what I looked like before that veil descended, or the vow exchanged between us.

Pensive, the speaker is caught within an environment her memory persists in making and re-making. White space, dominating the pages, begins to feel more like oppression than opportunity. Does it symbolize the “pristine white pills,” the white dress, the veil, or ash left in the wake of a fire? Perhaps it is the area that would be occupied by text, had it not been obliterated by the speaker’s experiences and circumstances, the ones she is continuously dismantling and rebuilding, ones that never climb high enough to scale the pages.

Despite its reputation for silence, white space is a vocal presence throughout the book. Citing the work of artist and writer Yedda Morrison and poet Ronald Johnson as influences, within the preface and epilogue Darling creates erasures of Elaine Scarry’s book, The Body in Pain (1987). Erasure is a method of re-surfacing, of submerging the primary intentions of a text to see what other associations might emerge. Yet it can also be a way to re-purpose the essence of a text, to find what one is seeking among those surfaces and all they obscure. Whereas one of Scarry’s main theses is that pain’s unsharability causes it to be both undertreated in medicine and manipulated in times of war, in Darling’s exercise what is sifted from Scarry’s book is a story grounded in love and the body of the individual. From the preface:

when one speaks about “one’s own physical pain” and about “another person’s
physical pain,” one might appear to be

when she falls in love

but actively destroys it

Such results can be problematic, in that they raise questions concerning the degree to which this erasure in turn annuls the social and political messages of the source text. In “An Epilogue,” Darling allows more of Scarry’s political discourse to surface with the repetition of the word, “war,” and the isolated appearance of the words, “Dresden,” “defeat,” and “aftermath.” But positioned as they are at the end of the book, the fragments of this section are so strongly embedded in the narrative preceding it that to include such words registers as jarring, as they point to a political significance Fortress has not explicitly—or implicitly—worked to earn.

There’s a second procedural influence at work, and Darling’s approach of arranging portions of the text as footnotes brings to mind another book employing the same technique. Jenny Boully’s The Body: An Essay, published in 2002, constructs a disjunctive series of referents to an absent or suppressed narrative. While Boully’s use of footnotes becomes a means to excavation and expansion, Fortress generally maintains allegiance to a unifying narrative of a failed marriage, drug use, and the speaker’s search for self among the ruins. Rings, fingers, ash—it is difficult to tell if the text refuses moving on, or if it simply has, like the speaker, nowhere else to go:

14. Since her husband’s disappearance, she could no longer endure the various objects that survived him: an empty bottle, a glove, some photographs tucked away in a book.
15. A letter fragment in which she describes his disappearance as both “devastating” and “entirely necessary,” given the effects of his presence on her delicate face.
16. Meaning, in this case, “an aftermath.”

Objects populating the landscape—bottle, glove, photograph—remain inert symbols reminiscent of fairy tales rather than evolving into unique images built from unexpected comparisons. Perhaps through the arrangement of the text, the purpose was to derange and expand possibilities for meaning. Yet often the footnotes read successively, logic overriding chances for reimagining. While a fortress is commonly thought of as a heavily protected building, it can also refer to a person who is impervious to outside influence. It could just as easily apply to attention’s tendency towards preoccupation.

Of mourning and melancholy, monument and memorial, in Darling’s Fortress grief builds a text from the cinders of experience, illuminating what is present by what is absent. As Elaine Scarry writes, there are “two paths by which injuring achieves invisibility—omission and redescription.” There is injury in these pages, but it is not made invisible, nor is it cloaked and repackaged as a fable of rebirth. Like the tiny doves etched on the speaker’s wedding china, it is fragile, and it is permanent, and it remains.

Laurie Saurborn is the author of two poetry collections, Industry of Brief Distraction and Carnavoria, and a chapbook, Patriot. A 2015 NEA Creative Writing Fellowship recipient, her poems, short stories, essays, reviews and photographs have appeared or are forthcoming in such publications as The Cincinnati Review, Columbia Poetry Review, The Rumpus, The Southern Review, and Tupelo Quarterly. Laurie teaches creative writing at UT-Austin, where she also directs the undergraduate creative writing program.