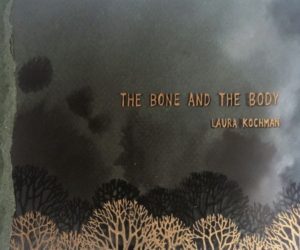 The Bone and The Body, by Laura Kochman 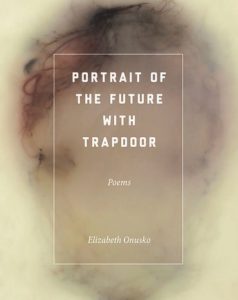 Portrait of the Future with Trapdoor, by Elizabeth Onusko

Our present moment is full of dark reflection (as “present moments” apparently continue to be): on world events, on a sometimes idealized comparative past, and on a future that, we often argue, looks darker by the day. Through our attunement to bleak moments, though, sometimes emerges a sliver of hope. The poetry of Laura Kochman and Elizabeth Onusko handles these moments in distinct but powerful ways—and though these poets operate with disparate goals and with markedly individual methods, a conversation emerges between their works that makes a combined reading a true pleasure to undertake.

Kochman’s collection The Bone and The Body is a study in both folklore and physical and emotional architecture. Interpretable as a book-length single poem or even a stream-of-consciousness narrative, Bone conflates reality with mythology, and body with house. Here the predominant landscapes are beach and woods, and the narrator struggles to articulate their mind to a tenant who isn’t there. The house this tenant occupies is as metaphorical as it is an actual dwelling place, and it takes on a mythical quality in the poem “Letter to a Tenant – October 16”: “before the nails removed themselves from the premises . . . this house was yellow.” Early on, the narrator confesses a fear to this tenant, and here mythology really takes hold: “If there really is a woman in the woods, she haunts a house on gilded / chicken legs” (“Letter to a Tenant – October 19”). This reference to the Slavic witch Baba Yaga becomes a central theme of Bone, and the ambiguity with which this witch is often seen mirrors the uncertainly felt by the narrator throughout the book.

The narrator’s fear is soon established as very real. The poem “Letter to a Tenant – October 23” begins with an ironic formality—even in their fear, the narrator must remain professional—that contradicts the supernatural urgency of the moment: “In the interest of full disclosure, there is a woman in the woods. / Sometimes through the trees she teases me, the tail end of a chimney / disappearing in a flicker, the smell of her fading…” Here, the narrator confirms that they feel very haunted—and this feeling informs the rest of the collection, heightening a sense of surrealism. The narrator admits that “Sometimes I call to the woman in the woods and she / pours out of my mouth,” allowing a conflation of narrator and mythological witch. Just who this narrator is remains often ambiguous throughout the collection.

Parallel to the ever-living Baba Yaga is this seemingly eternal but oft-suffering house. Later in Bone the narrator becomes the chronicler of what happens to this structure as the ocean brings forth its decaying forces of salt and impact. The narrator calls for help not from the absent tenant but from that hidden witch, and seems very much alone: “When the wave came, where were you? . . . This house / peels like a scab in the sun. Like a book left out on the beach. It took in the salt water and now the siding is shrinking” (“To the Woman in the Woods – November 7”). The alienation the narrator feels is driven home at this poem’s end: “There is no echo, no sound. No one is yet sorry.”

Laura Kochman’s The Bone and the Body reinforces its narrative of isolation and struggle in the face of long odds, often speculating on what could be: to the narrator, the absent tenant and the mythic witch are equally real in their absence, and just as real are the daunting elements suffered by narrator and house alike. Later poems speculate on circumstances that would change reality. In “A Circle of Salt – November 10,” the narrator wonders in this vein: “If the gray bone of the beach did not tease the sea. If salt did not form crystals. If a body was not made of water…” And though speculations loom large throughout Kochman’s collection, reality is often the exact right thing to face to strengthen one’s body and the bones within.

Elizabeth Onusko’s collection Portrait of the Future with Trapdoor emphasizes necessary strength as well, but for a different purpose. This collection, winner of the 2015 Bryant-Lisembee Book Prize, explores a different alienation than Kochman’s book, but one that proves complementary. Here the focus is both internal and analogous to the surrounding world. Portrait explores the effects of disease, surgery, and the grieving process. Paired with these foci are studies of war, ecosystem failure, and societal upheaval. Rather than portray the outside world as hostile to body and structure, as Kochman does in The Bone and the Body, here the outside world is the body as macrocosm. Our planet, Portrait asserts, teems with people who turn on one another as readily as blood cells caught in the grip of autoimmune disease. Onusko’s collection begins with “Weeping.” Weeping soundlessly, weeping / blood. A heartbeat in deep cover.” Regardless of situation, this poem’s tone is desperate and heavy as death (“Case History (Symptom Repertoire)”).

Portrait’s dark mythology sets in immediately. In “”How to Be Almighty,” the narrator externalizes feelings of inadequacy (and malice?) through somewhat sinister play:

to play a game you’ve created,
which they’re trying to learn

but are mostly failing. Watch them
spend hours staring at bodies

of water, as if waiting for a revelation.

This poem places the narrator in the position of God, or nature, or some other external force possessing total control. Like the ocean in The Bone and The Body, here “bodies / of water” signify both destructive natural forces and the alien mystery of the human body itself. Onusko’s narrator makes themeselves omnipotent as an implied reaction to powerlessness: the “game” here can be read as life, and the failure speaks for itself. After all, we too wait for enlightenment when there may be none forthcoming.

The poem “Bruise” again connects nature to hurt and injury, but in a more intimate way. Bruises are often written of as “flowering” across one’s skin, but here that metaphor is inverted: “In the flowerbed bordering out house / is a wound of violets / the size of a basketball,” the narrator notes. “All we can prove / is effect.” That effect is deceptively simple, suggesting an inevitable cycle of creation through harm: “That which stood and stretched / now takes the shape of / what destroyed it.” This cyclical notion informs large parts of Portrait. Later the narrator revisits this idea through layered abstractions: “There is no right way to hold your breath. / Flashing lights preceding a fainting spell / are visions of night-blooming jasmine” (“Studies Have Shown”).

Even for these ominous ideas, Onusko’s imagery also conjures uplifting moments. In “Case Study (Course of Treatment),” the narrator spells this change out:

Shift perspective:
the island of skyscrapers
is a system of roots

This poem inverts expectation and the natural world as one—though hardship and disease, unrest and societal ills flower, so too does human progress. Through these and other poems, Portrait of the Future with Trapdoor shows that hardship sometimes holds moments of positivity that we dig deeply to uproot.

In these two excellent collections, Laura Kochman and Elizabeth Onusko examine themes of destruction and decay, resilience and hope, the tangible and the irreconcilably surreal. Through Kochman’s The Bone and The Body and Onusko’s Portrait of the Future with Trapdoor, readers can glean a greater prescience of our place in a turbulent and sometimes hostile world. These are deeply necessary and highly insightful books, and should be the next additions to every poetry bookshelf.

Readers can purchase The Bone and Body from BatCat Press. Portrait of the Future with Trapdoor is available from Red Paint Hill Publishing. Both titles can also be purchased from Amazon.com, and from most national booksellers.

Tyler Robert Sheldon is a Pushcart Prize nominee and the author of First Breaths of Arrival (Oil Hill Press, 2016) and Traumas (Yellow Flag Press, 2017). His poetry, fiction, and reviews have appeared or are forthcoming in The Los Angeles Review, Quiddity International Literary Journal, The Midwest Quarterly, Coal City Review, The Prairie Journal of Canadian Literature, Entropy Magazine, The Big Nasty Press, and other venues. He holds a BA and an MA in English from Emporia State University, and is an MFA candidate at McNeese State University. He lives in Baton Rouge. View his work at tyrsheldon.wixsite.com/trspoetry.