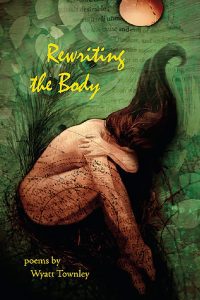 Kansas Poet Laureate Emerita Wyatt Townley’s new collection Rewriting the Body is perhaps best described as a book of definitions. As suggested by its title, this book works to define—rewrite—the body, but also examines the layers of meaning that we’ve constructed for our minds, the poems we create, and other everyday ideas and objects. This notion becomes clear immediately in “It’s Easy,” the opening poem: “[It’s easy] to enter the room / of this poem. Less / so to stay,” Townley confides. Poems, like bodies, comprise more and are greater than we might think at first. The poet welcomes us inside the home she’s made in these pieces, concluding the poem warmly:

Inside this book
are other rooms,
a whole house curled
inside a tree. I’ll leave

the porch light on.

Townley knows her readers well, and her narrator is a fitting avatar for the poet herself—always ready to encourage others, no matter how timid, to explore and define their place in the world.

The moving villanelle “The Closet” expands on the idea of defining the self by circling back to what we find most important in our lives. This concept plays out through the imagined lives of shoes: “The shoes lead here—all shoes show up at night / and call it a day. Each one points back to you. / Step in, step out of town and out of sight.” Our actions reflect and thus define who we are, this poem’s narrator asserts; no matter how secretive those actions may be, they are integral to our formed conception of self. All notions of one’s own being may coalesce secretly at first, in fact: “Step by step you’ve circled back to write / your memoirs in a closet rendezvous,” one that may or may not become wholly public.

Later in this collection, two poems complement each other’s message of defining not just ourselves, but the world around us. In “Morning Coffee,” the narrator muses on how sky and self are reciprocal, each reinforcing the other: “We’re drinking the sky / sip by sip . . . / clouds slide in / to kiss us.” The narrator, seeming to rejoice at singular interaction with the world, notes how important such an action is, even for its own sake: “if we linger at the lip / looking down // . . . we do it for the view.”

The second of these two matched poems, “Night Wine,” introduces a somewhat opposing message. Written like its partner in brief couplets, it demonstrates that “at the bottom / of the glass // lies the moon.” Rather than an exaltation of the sky, here the poem views it as nourishment—something to be consumed for power rather than any sort of communion:

seen
is the sky

going down
her throat

Like many places throughout Rewriting the Body, these two poems are placed with a keen awareness of space, the field of the page. The poems interact so well not just for their complementary messages, but also because they rest on facing pages near the very center of the book. In a way, the two different-but-equally-vital impulses demonstrated here are key to Townley’s larger message of redefining the self.

Sometimes too we must rewrite our bodies after loss. In “Day After,” the narrator examines what it means to see the world continue when we feel that by rights it should stop, because we have—because we might not feel we can go on. “The light will change the day / after. Cars will follow // the road,” the narrator assures. “Look. It is going / to rain. Everything / will shine again.” This elemental plea to for continuance in the face of tragedy is something we have all needed, or else will at some place in the future. The speaker is gentle in their affirmation, speaking right to us, the readers: you there, they say, “above this book // will close it / and rise into your life.”

The title poem comprises this collection’s whole last section and is divided into fourteen poignant parts. Each section of the poem contains powerful abstract actions—methods for doing what this book entreats be done. The body is not wholly ours by default, the unseen narrator points out. We earn it, we cast it aside, we rediscover it and at times even come close to meshing with it wholly. Part 1 likens the body to a powerful, undefinable element: “It arrives and you / take it back / like a hand from the fire.” The body is also a metonym for change, and in part 6 this collection itself plays a role in the body’s definition: “to turn a page / first you gotta / open your fist.” Change in the body can be echoed by change at a deeper level, to which this section attests.

In the titular poem’s final section, the redefining is finally complete, and the poem leans across the page as if to say, you see, it can be done. Though we may end up a wholly different self by the time we fully discover who we really are, the change is often for the best:

and beyond the finish
line the body rewritten

in the mind of another
raising an eyebrow
across the room

In Rewriting the Body, Townley shows that nothing—not even the seemingly immutable self—is set in stone. The changes we seek out and those that find us may be unsettling, but they can ultimately help us settle into more realized versions of ourselves.

Readers can purchase Rewriting the Body at one of Wyatt Townley’s many readings or from Stephen F. Austin State University Press, as well as online and at regional and national booksellers.