None of it. That’s what I remember
(forty years until I’d be born)
about the end of World War II.
I know you had stars
on your chest. I know that bodies
washed ashore by night,
a world away, & in California, by night
you kept watch for bodies—the ember
of your cigarette bodying
the soft breeze, its dim light airborne—
a beacon almost, like Polaris
itself—a lone point in the constellated war
between bear & dragon. The war
you fought wasn’t unlike that nightly
battle, from the star-studded
Bear Republic. You must’ve remembered
its end, men come home to newborns
at last, the still-rising body-count,
as though new bodies
could replace those lost at war,
but you never said so. Reborn,
at home, you bottle-fed a foal each night—
the mare dead from labor. Remember.
How couldn’t you remember the stars,
fading with morning? The stars.
The stars—celestial bodies
disembodied, dismembered,
wheeling figures, at war
with themselves. The night
before you poisoned the pond, waterborne
spiders must’ve swaddled dragonflies, death born
from necessity. By the time the stars
resurfaced, & again night
had spread itself, all was gone. Bodies
blanketed the water. Another war
was won—your pond, lifeless. You remembered
that night so well. Dead, you can’t remember—
not the moon & water at war,
not the stars multiplied by each unborn body. 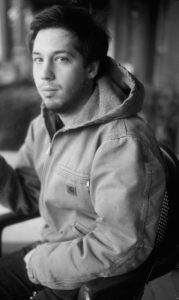 A current Wallace Stegner Fellow at Stanford University, J.P. Grasser has work forthcoming from Pleiades, The New Criterion, and Horsethief. His published poems appear in 32 Poems, AGNI, Best New Poets 2015, Birmingham Poetry Review, Ecotone, and West Branch Wired, among others. J.P. serves as Editor-in-Chief for Quarterly West and is pursuing his doctorate in Literature & Creative Writing at the University of Utah. For more, visit www.jpgrasser.com.