The continent died with you, China

formation of a country that will outlive you, consider white

men on horses, a cruelty we all recognize. No more rivers manifest

their gold, only iron, only a brother’s bones stomped to wine,

the first rule they taught you: never whine

or speak, so you learned to sing of a sea china

-blue: a sea sung into the mouth keeps thirst from its manifest.

It is summer and hot and you dig so deep you hit skulls.

The white men say leave it. Left, they white

out the horizon, burn like bulbs, a light that will never trans

late as a Chinaman: the joke is who owns time, and who must trans

at least.  This is America, after all. Haha, look how white

man with the end of his pigtail stuck up his – ok, ok. Back to business. Skull

In new country, learn only the names of things that could kill you: Manifest

mute: scoop an ear into the ground, curl inside like a dead language. Skulled

but never spoken, a language ferments, gives up its wine

1776 miles, one for every year the whites

stayed: no Chinaman wanted to. White

lies to send home: even their dust is gold. Even gnawed bones manifest

new meat.  Lazy bones, you were called in China

Acceptable meat, you are now in America. Call it trans

To measure a man against the price of sending back his skull.

I don’t like the look of them, those slant-eyes, that skulk

women – protecting – being a man.  They can’t even hold their wine

for God’s sake, for the sake of God, our God, ever-living, ever-manifest–

it’s a matter of values, beef-eaters or rice-eaters, our God or trans

In California, I ride the train along a crease in your palm, trans

fixed: nothing can be. Light through the window skull

-capping me, tightening, wearing me white. 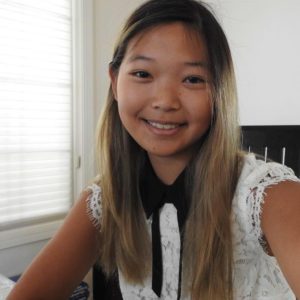 Kristin Chang lives in NY. Her poetry has been published or is forthcoming in the Shade Journal, Teen Vogue, the Asian American Writers Workshop, Nightblock, The Shallow Ends, and elsewhere. She has been nominated for Best New Poets 2017 and is currently on staff at Winter Tangerine.