Some boys aren’t born at all, until they meet another boy &
he teaches them about atoms.

Valentino planted a seed in my hands before they were hands.
He told me at the roots of us all,

we were all atoms & I smiled & said I had no roots. I got here
by some spontaneous explosion,

the opposite of euthanasia. I breathed & something threw me
here, without my asking. There are

a cleansing, whitening abandoned teeth. Black coughs up white.
Like my mother, African, birthing me,

a lucid colorless inverse. I am washed out & the tide pulls me in
again. But let’s go back to the seed &

the earth’s crust, the funeral. Underground, & we hack the roots
into tasteless chunks with no origin. 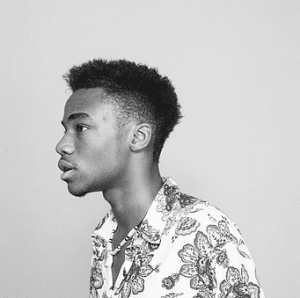 Logan February is a happy-ish Nigerian owl who likes pizza & typewriters. He is Co-Editor-in-Chief of The Ellis Review. His work has appeared or is forthcoming in Vagabond City, (b)OINK, Glass, and more. His chapbooks, Painted Blue With Saltwater (Indolent Books) & How to Cook a Ghost (Glass Poetry Press) are forthcoming in 2017. Say hello on Instagram & Twitter @loganfebruary.