& perhaps after the dance party, from which people were leaving & to where people were still

arriving, too, you returned

to the car out on Jenkins, in front of the warehouse, where three men were standing,

shirtless in winter, taking hits from a meth pipe & you

said, excuse me, & got in your car, driving back to your apartment, a little high,

or just lonely, & perhaps you turned

back & offered them passage, to somewhere, your own home, a furnace since the heat

vents won’t close, & they took it, the ride

& your body, which you gave them, perhaps each one, however they elected

to take it & you offered no protest, said

take it, it’s yours now & after they used it, perhaps you said thank you & they left

to go nowhere, or back

arriving, too, & perhaps to where you’ve also

returned, now thinking it better than nowhere, or right there, in your body, which is too full

of new bodies that have not yet got to dance. 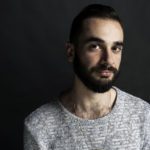 Daniel T. O'Brien is a New York native currently living in Columbus, OH. His work has recently appeared, or is forthcoming, in American Literary Review, Banango Street, BLOOM, The Boiler, Prelude, and Sequestrum. He is a recipient of the 2016 Vandewater Prize and the 2015 Helen Earnhart Harley Creative Writing Fellowship in Poetry from The Ohio State University, where he is currently an MFA candidate and serves as Poetry Editor for The Journal and Managing Editor for The Journal/OSU Press Book Prize Series. He has been a finalist for the American Literary Review Poetry Contest and the Red Hen Press Poetry Award.