fringe |::| a fraying boundary |::| a line separating two political or geographical areas, especially countries |::| countries that flood in & out of each other’s gaping bodies |::| a body of water that does not end with the horizon |::| the edge of the map & the ghost ships anchored there |::| gold that frames the mirror |::| petroleum coating the tongue with coins |::| the limit of geography unmarked by bloody hands |::| asymptote of eyes refusing to close |::| the end of an executive order & the dead that come after |::| flank |::| surrounded by steel |::| the curve of a corral & the horse’s broken jaw |::| the distance two people cross to say I love you |::| the emptying of language & the bodies that unspool in its wake 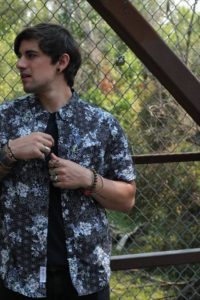 Brandon Melendez is a biracial poet born in New York and raised in California. He is a National Poetry Slam finalist, Rustbelt Poetry Slam finalist, two time Berkeley Grand Slam Champion, and he has won “Best Poem” & “Funniest Poem” at collegiate national poetry competitions. He received a B.A. in English from UC Berkeley and is currently an MFA candidate at Emerson College.