Here’s the truth: the least I ever weighed was 161.8 pounds,

and as I much as I wish I didn’t remember that,

I also wish, even now, I could be that thin again.

In the morning I see my sagging belly—soft putty

inside those numbers blinking on the scale,

feel myself vanishing, and love it. I don’t mean

I do mean I deserved to suffer. Or thought I did. Or do.

Then, I didn’t think anything was wrong. I was losing

only what I wanted, becoming something better.

because of those months, bad as they were,

that even though I know I should, I don’t regret

to sweat the most, am I healthy? Healed? Normal?

This is the part I wasn’t prepared for, that it would not stop.

That four years later, I would feel just as I did then.

When the flooded river sifts its scrum to my doorstep,

and the night freight yanks me awake with its bone-clack,

will it ever end? Tell me—am I still that broken boy? 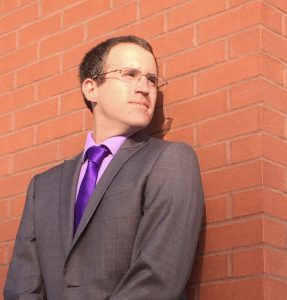 Kirk Schlueter received his MFA in poetry at Southern Illinois-University Carbondale. His poetry has been a finalist for the Indiana Review Poetry Prize, the Yemassee contest, and has appeared or is forthcoming in Ninth Letter, Green Mountains Review, Zone 3, and Gulf Stream among others. He has been awarded a full scholarship to the NYS Summer Writers Institute, and has been part of the Hungry Young Poets Reading Series in St. Louis.