That first summer we spent so many languid hours half-dressed
on the lawn which spread between your mother’s house and the highway
that we could’ve been the calendula growing around and under us,
charmeuse-petaled, ochre-orange,
spicy and sun-steeped.

But calendula don’t carry tobacco in their shirt pockets,
roll thin cigarettes between gorgeously filthy fingers,
drink back the nutty smoke.
They don’t, at summer’s end,
move to a milder city,
slap a mattress on their new living room floor
splintered by stained-glass light,
admire the crown molding,
fuck tantrically,
or slip into the grey tedium
of winter, of work,
argue about mud clots on the carpet,
the too-turquoise décor,
laziness and neuroticism.
They don’t press an apology between their tongues,
dream up a parcel of land
with a chicken coop,
vegetable patch,
citrus grove,
two dogs and two kids;
find that the bathwater’s gone cold.
Wind-blown and mute they don’t fumble
with the faucet—unable to agree on temperature—
until milky water spills over the tub’s hard edges. 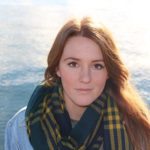 Amber Higgins has just completed her BFA in Writing at the University of Victoria. She writes poetry and fiction, and has been longlisted for the 2016/2017 Galley Beggar Short Story Prize. She is Canadian-born and currently resides in Victoria, British Columbia, with her partner and two very kissable cats.