Six-years-old, crafting in her mind herself
with Casey’s hair, Logan’s smile, and Arin’s legs
‘cause they look better in the same pair
of rhinestone bedazzled JCPenney corduroys.
Ten-years-old, huffing after gym class fitness test.
She’s in the 34th percentile. Why isn’t she good enough?
Thirteen, covering her stretch-marked breasts
every morning with concealer. First time she hears
the voice, Good job. Without concealer, you’re not
beautiful, but stick with me—I can make you beautiful.
The voice is soft, seductive, gives her hope.
Fifteen, best times are on the toilet—the bad leaving
her body, creating empty space inside her.
As if she needs more empty space inside of her.
What she needs is more empty space
between her thighs. She had dreams once,
and friends. They disappeared with after-school snacks,
lazy Sundays, mother-daughter bonding time,
Shiny hair and laughter. She once stepped on a caterpillar
and cried, peeled the little life from her sole,
its dull green flesh kneaded like dough. She buried it deep
within the woods, buried it like her grandparents
and her self worth. She visits their graves
a couple times a year. She avoids team dinners,
tells Sam she’ll eat at home, tells Mom she ate at Sam’s,
tells herself it’s normal and necessary to run at night
to the jiggle of her body, which she cannot bear
call her own even as it heaves in fear. Breath shallow
breath quick. A little guilty, a little sick. Am I enough
she asks the voice, as her body hits the floor.
You lazy worthless fuck, it says. Get up! Do more!
You fail at everything, don’t fail me too.
She wants to say fuck you but what comes out is I’m sorry.
The doctor says better is hair that doesn’t thin with each
cold and shameful shower. She thinks better is jeans that hang
in curtains off her hips, collarbones holding water
in their hollows. She counts calories like sheep,
strokes her ribs each night to soothe herself to sleep.
Takes fifty sit-ups to justify her lunch of twelve peeled
grapes. Her grinding bones protest, but the voice
says keep wasting. They say this voice is called ED—
for eating disorder. They say it lies, hurts her,
she must fight it. But ED has shown her the way
through hell and off a bridge. ED has mentored her,
Conscience and reality. Her closest friend is ED.
They say she must reframe disordered thoughts.
She’s dying, slowly, each piece of gum for dinner. But
gum for dinner defines her success. Or is it ED’s?
Or does it matter? Sam says, just lettuce?
I thought you were better. ED answer Don’t worry Sam,
she’s saving room for later. When her birthday cake bakes,
for fifty minutes she will pace around the oven, delirious
in the sweet buttery scent of the forbidden fruit.
Her mom will cool and frost the cake, first slice
for the birthday girl. Sorry Mom, I ate a big lunch.
You go ahead. But she did not put concealer
on her stretch marks today. Sixteen, no cell service at camp.
She would mail her mom a letter but she can’t
Google the number of calories on an envelope flap. 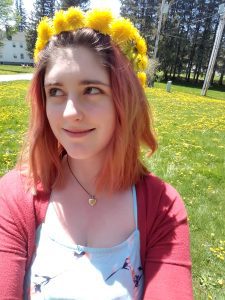 Rachel Evelyn Sucher is a queer-identified Vermont writer, activist, performer, horsewoman, and intersectional feminist. Her poems have been shortlisted for the International Literary Award (Rita Dove Award in Poetry) and the Dan Veach Prize for Younger Poets, and longlisted for the Brett Elizabeth Jenkins Poetry Prize. Rachel is the founder & editor-in-chief of COUNTERCLOCK literary & art journal, an editor at Sooth Swarm Journal, a social media manager at Half Mystic publishing house & literary journal, and a founding member and editor at Mandatory Assembly literary journal. A mentee in the Adroit Journal Summer Mentorship Program and the Glass Kite Anthology Summer Writing Studio, she has also attended the New England Young Writers' Conference at Bread Loaf and the Champlain College Young Writers' Conference. Her work has appeared or is forthcoming in Tinderbox and Rising Phoenix Review, as well as the anthology Destigmatized: Voices for Change from Madness Muse Press. Rachel is also a 2017-18 Trevor Project National Youth Ambassador. When she isn’t wrestling writer’s block or the patriarchy, Rachel can be found snuggling puppies, making music, and overthinking in her nerdy poet's notebook.