The light is a molten weight, a mountain
of thirst. It turns the old stones of their houses
into an ocean, azure dissolving into distance.

And they are a chiaroscuro huddled on the arthritic bridge,
bodies scant as bed clothes, damp and wrinkled
in the throes of nightmare, bodies trudging
in low relief against limestone.

Who spoke first as they walked? Did the boy
in slippers shuffle ahead asking
after his bicycle? Did the old man mutter
end-of-days verses between sobs? The sun scores
tender scalps, inscribes legends on a map of loss.

The light is damask draped on the clothesline.
Tea glasses touch with castanet swiftness, a mint haze
floats over the women’s words. The gate groans
and the clap of slender heels on cobblestone ushers in the evening.

The tea darkens in the pot as the cicadas
prepare for their supplications, mosquitos ready
for their night raids. One of the women slides the deck out
of its box, halves it, begins to deal. Another reaches
for her monogrammed lighter. Their laughter a rustle of curtains drawn.

The light is irrelevant, though it fills quiet rooms of departure,
great cones of it, dust mites swirling wild with gold.
How was the news delivered? Inscribed
in the ink of dreams or churning in the dregs
of coffee cups? Sick with yesterday’s fever,
the newspaper yellows in the stairwell.

Bespectacled experts survey the patterns
in prayer beads for signs
of structural damage, of impending collapse.
There is no wind to carry omens through our windows.
The dust creeps in to cover our feet again, another land
crumbling onto our skin.

It hasn’t rained in years
and the locusts walk among us,
sunlight ricocheting off their medals. 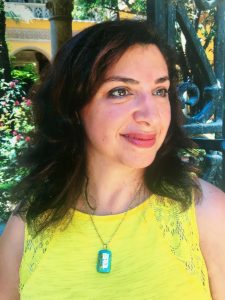