Sisters, after the day’s long walk, how fresh you were,

your white habits belted with a woven cord,

your hair covered in white wraps. So young you seemed,

to have taken vows of chastity. When I was a child,

my father brought me to meet

my cloistered great aunt, her skin the color of twilight

behind the screen where they kept her, or so it seemed,

like a prisoner. But you sang Eres tú and strummed

your guitars as if in love with each one of us.

why we are on the Way–I said I wanted to escape,

but didn’t say from what. One of the pilgrims, a man,

But it’s a sham, a game I play, this act of goodness.

When I was seventeen and my hair was black and long,

my boyfriend, too old for me, knocked me up–

such a crude expression, forgive me.

she had glanced at my bank withdrawals. I didn’t lie,

as my boyfriend said I should’ve, and tell her I’d bought new clothes.

God will never forgive you, my father swore.

two married daughters were stripped of their robes

and jewels, tied to a tree and beaten, their father the count

galloped on his epic horse to free them, then married them off

to some other lord, still chattel, but honor restored.

These stories are old, but if I had told you mine in Carrión,

Dear Sisters, I want to escape this invisible body,

call it a sheath of shame, to leave it on the hot, dry road for the vultures. 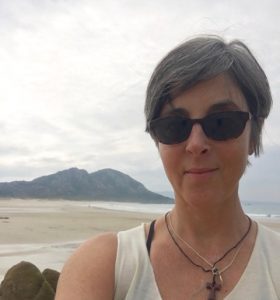 Christine Swint's first poetry collection is Swimming This (2015) with FutureCycle Press. A former high school Spanish instructor, she teaches English part time at Kennesaw State University and writes about pilgrimage, spirituality, and poetry at Balanced on the Edge, https://balancedonedge.blog. She holds degrees in English and Spanish from the University of Georgia, a master's in Spanish from Middlebury College, and an M.F.A. in creative writing from Georgia State University. Her current project is a travelogue in verse that chronicles a 500-mile pilgrimage she took from the Pyrenees Mountains in France to Santiago de Compostela, Spain, ending in Fisterra, in the region of Galicia.