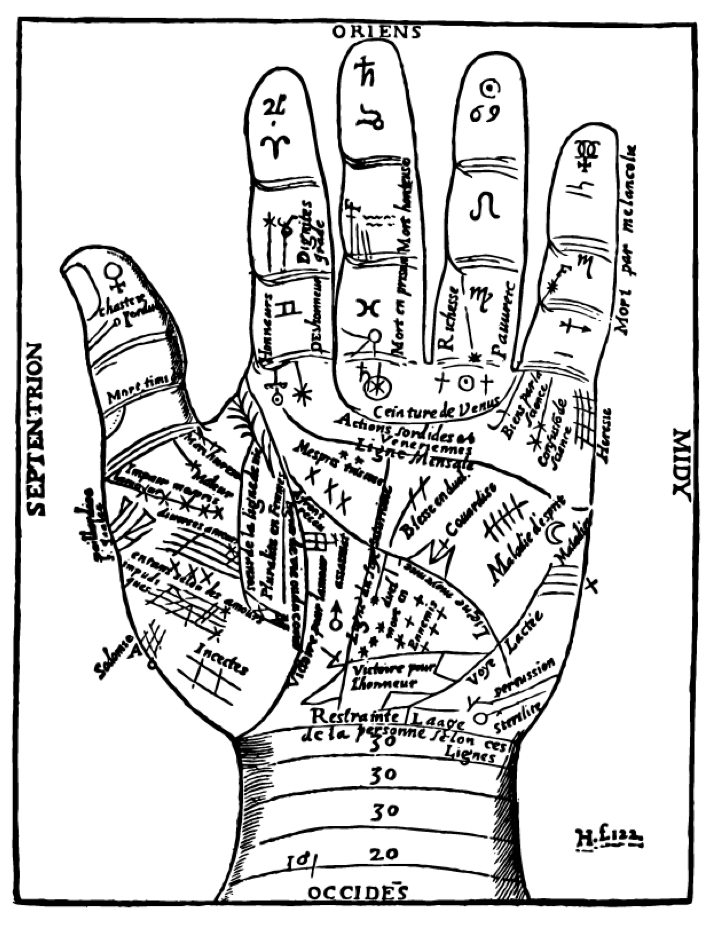 or delusions of morality. 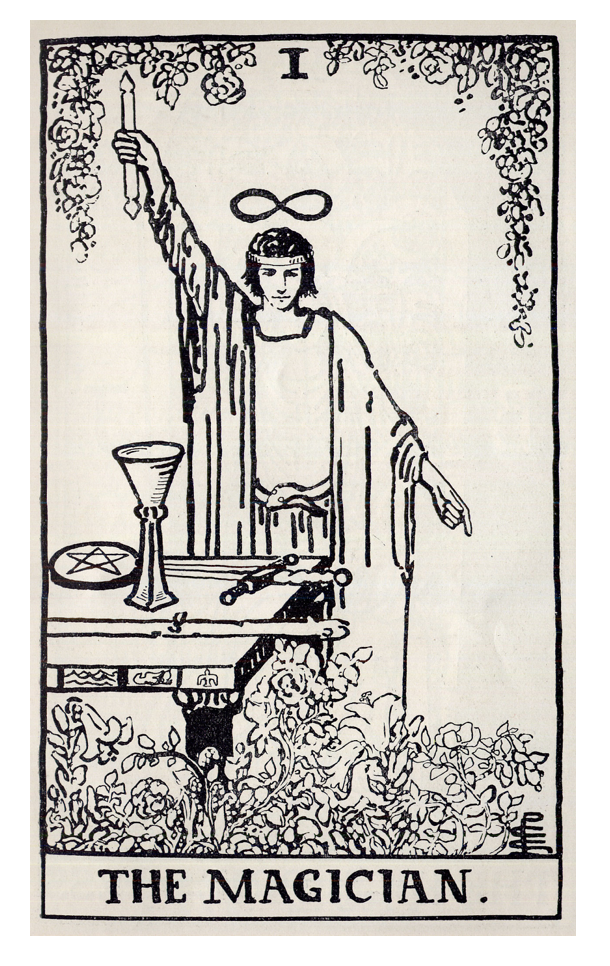 Some frequent keywords include:

In the Magician’s right hand is a wand raised toward heaven, the sky or the element
æther, while his left hand is pointing to the earth. This iconographic gesture has
multiple meanings, but is endemic to the Mysteries, symbolizing divine immanence,
the ability of the magician to bridge the gap between heaven and earth. On the table
in front of the Magician the symbols of the four Tarot suits signify the Classical elements
of earth, air, fire and water. Beneath are roses and lilies, the flos campi and lilium
convallium, changed into garden flowers, to show the culture of aspiration.

Some schools associate him with Hermes, especially Hermes Trismegistus, a syncretic
Egyptian/Greek figure who is a combination of Hermes and of Thoth, a god of the moon,
knowledge, and writing. In this aspect, The Magician guides The Fool through the first step out of
the cave of childhood into the sunlight of consciousness, just as Hermes guides Persephone out of the
Underworld every year.

He represents the potential of a new adventure, chosen or thrust upon one. A journey undertaken in
daylight, in the Enlightenment tradition. He brings things out of the darkness into the light. He
explores the world in order to master it. He is solar consciousness.

He is associated through the cross sums (the sum of the digits) with Key 10, The Wheel of Fortune,
picking up on Hermes as a Trickster figure and a god of chance, and Key 19, The Sun, bringing us
back to Apollo and to enlightenment.

He embodies the lesson of “as above, so below,” the lesson that
mastery in one realm may bring mastery in another. He also warns of the danger of applying lessons
from one realm to another.

The Magician transcends duality. He has learned the fundamental elements of the universe,
represented by emblems of the four suits of the tarot already broken apart and lying on the table
before him. Similarly, in the Book of Thoth deck, he is crowned by snakes, another symbol of both
infinity and dualism, as snakes have learned from Gilgamesh how to shed their skins and be reborn,
thus achieving a type of immortality; the blind prophet Tiresias split apart coupling snakes and as a
result became a woman, transcending the dualism of gender.”[1] 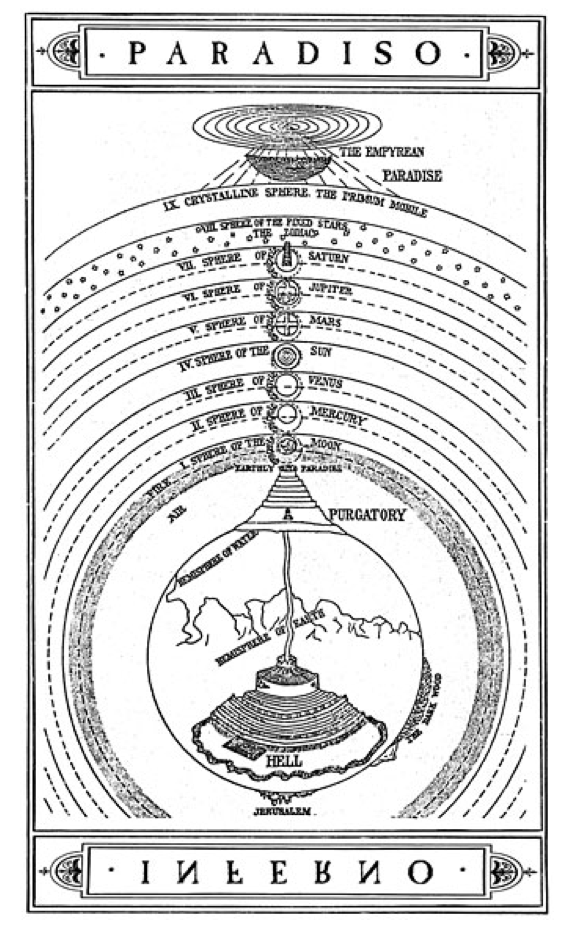 First Sphere (The Moon: The Inconstant)

When I was a child I had a rocking horse, a horse on thick springs, its mane ever tousled in the exact same way, day after year.  I would ride it into a hole in the ground that opened just for me, just for my horse and me. The passage of time below was inconstant while time above rocked back and forth on its unseen springs.

My dream was to reach Paradise, wherever it was. Through the tunnel, along the swinging bridge, down the shaft, through cave after cave. What came through but trains and babies with their nurses and businessmen dressed all alike. Each time I was tempted to plant mines behind me that flower into fire, preventing my being followed.

In my saddle bag I carried hearts that I found, amongst crowds above ground. I carved my name on their surprisingly tough surfaces as though they were picnic tables, a pastoral banquet waiting for me.

Fourth Sphere (The Sun: The Wise)

It is dangerous to be wise, you might be called upon to separate mating snakes, eat their skin, be cursed to live as a woman for seven years, to marry and bear children, and turn back again, burdened by knowledge, by this metamorphosis.

Fifth Sphere (Mars: The Warriors of the Faith)

So many ways to kill the faithless. Every body can be broken, burned, a bane, a bond. To destroy my enemies I need only join them, transforming them into my brothers, my family, my people.

We are guests above the ground. While alive, we are uncanny, always falling back into wilderness. Our vegetable love outlasts the centuries, outlasts the protean nature of justice of the day. Addicted to authority, the ground littered with needles, our blood mingled and tainted. Impure. You cannot escape me now because I am inside you.

No more hangings, no more gas chambers. No one allowed to remain in the center of the labyrinth, guarding their DNA from the world, from the future. No more contemplation, no more waste. Everyone leaning toward paradise. Shields down and the word enemy will pass from memory. You are my kind.

At the end of the world we will move through this wild, infinite palace. Gardens with the softest of flowers. Folded, mellow light. All unruly every room filled with animals risen from extinction, the taste of sacrifice still on our lips. All atoms equal. Every snake biting its own tail and every child tearing down the tent.

At the end of the world everything will be wingèd. My neck is a door, walk through it to the rough and savage woods inside me. Take your torch and burn any monsters to hot ash and dust. I can cough everything out and back into this blazing world. Axe to the frozen sea, hexes and incantations, yesterday’s reverie, usher in every little last thing you have.

At last. Light all around us, my body a room of lamps, every wick lit as though it was the world’s last birthday. Time is now inside me, transfer and possession, never holding anything back, indifferent to my illegitimacy, disinterested in my grief, pierced with all of my joy. Inside me, a second, better person, furnished with perfect recall, my convict, my warden, my guest, my host.

Sun Yung Shin is a Korean American poet, writer and educator living in Minneapolis, Minnesota. She is the author of Rough, and Savage (Coffee House Press, 2012), Skirt Full of Black (Coffee House Press, 2007), the bilingual (English/Korean) illustrated children's book Cooper's Lesson (Children's Book Press, an imprint of Lee & Low Books) and she was an editor with Jane Jeong Trenka and Julia Chinyere Oparah for Outsiders Within: Writing on Transracial Adoption (South End Press, 2006), the first international anthology on the politics of transracial adoption edited by transracial adoptees.