They have to be happier here. Lord knows
they couldn’t survive in their homeland. Let them be
pets in a kennel. Besides, I can’t own
a pet because of my allergies, so I don’t have any rights
to an opinion on this. I shouldn’t even mention
the word captivity because this is still Alabama
and, well, you get it. But I did
mention it, and I did see African plunder
in a Southern cage, and I did see the Confederate
hospital, and I did see the tiger-tooth gleam
in so many eyes when they got to shake my black
hand and introduce themselves.
There’s a Tarantino movie here.
I discover the lion was stolen
from the same village my ancestors
were stolen from. He recognizes a kindred
scent when I put my hand on the cage.
I see my mother’s motherland in his cold stare
that isn’t cold to me anymore.
I discover my roots and ride
my lion brother into the board of trustees meeting
and we both eat good that day.
There’s a Shyamalan movie here.
A calm, sleepy setup building to a gasp when
the twist reveals lion dads and moms
ohhing and ahhing and pointing while they walk cubs
up to the cages where humans nap and roll
in the sun-broiled grass.
There’s a Tyler Perry movie here.
The lion really left Africa because he was running
with the wrong crowd and one of his bad lion friends
ate a guy and he didn’t know they were going to
eat people. He thought they were just going to scare
some kids, so when he saw the feet and ribs dangling
out of his friends’ mouths he ran and stowed away
on a ship to America and found work as a school mascot,
but the school president is watching a show called
Most Wanted Lion Gang Member
and sees never-before-seen night vision footage
of the crime. And he wants to fire the lion,
and calls the lion a liar, and he can’t believe
he let the lion around his kids. But the lion says
that we all have a past, and the lion’s friends show up.
They tell the president about how the lion has grabbed
the kids’ imagination and given them something
to look up to. Then a baby kills
the scene with a tiny baby lion roar,
and the school president relents and leaves
the lion in the cage, and the lion is left
to count how many locks have to click
before he can call himself free.
But you know all this
ain’t about mascots, right? It ain’t
about movies, either. 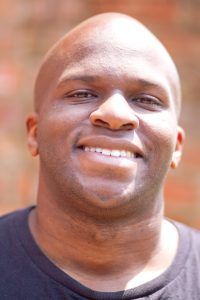 Jason McCall has an MFA from the University of Miami. His collections include Two-Face God; Dear Hero,; Silver; I Can Explain; and Mother, Less Child. He is co-editor of It Was Written: Poetry Inspired by Hip-Hop. He is an Alabama native, and he teaches at the University of North Alabama.