What was her relationship to the number six?
Did you unbutton her daily bread?
Does she mispronounce her own name?
What are the names of her dead?
Was she founded on nothing?
Does she disengage the clutch & set the parking brake?
What death does she prefer?
What about her is autobiographical?
Does Google love her?
Where is her bankruptcy?
Was her alphabet a soup that spelled itself in your gut?
Which hand was she holding behind her back?
Did the window keep asking her to jump?
Did she ever lick a pistol?
When is her leash?
Does her art hate itself?
Did her hair beat you like a whisk?
Did she whip it? Did she whip it real good?
Did she sip genmaicha from her own ceramic vagina?
Did she swim inside the fish?
Unscrew the lid of her caffeine habit.
Remind me what time her body is.
Name for me her favorite volta bracket.
Show me her singing cutlass.
Show me her Red Lobster.
Describe her first syntactical fuck-up.
Remind me what she tasted like.
Place her finger inside the sewing machine.
Encounter her in the privacy of my underwear.
Spell her sense of cologne backwards, beginning with the letter “k.” 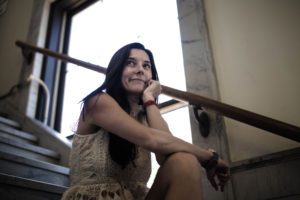 Emily Vizzo is a writer, editor and educator whose work has appeared in FIELD, Blackbird, jubilat, North American Review, The Los Angeles Times, Next American City, and other publications. Her essay, "A Personal History of Dirt," was honored as a notable essay in Best American Essays 2013, and she was selected for inclusion within Best New Poets 2015. Her chapbook, GIANTESS, is forthcoming in 2018 from YesYes Books. www.emilyvizzo.com