i’m mainly talking about the walls of our cafeteria and how they dripped with the sweat of teenagers let free once a year to move our bodies however we wanted and the speakers lived right next to where they served jerk chicken on wednesdays but the only things moist and edible here were the lips of the same girl that sat in front of me in economics with her hair in an afro and the lure of shea butter filling my nose and the whole cafeteria was a shea butter dancefloor where boys would lock hips with the curved side of a girl and we‘d sway like the tapered end of an impatient flame until the cafeteria looked like it was burning and my sister said the burning turned into a paradise when she swung her hips on top of the boy she snuck into her room while Grammy was out front making a banquet out of the dead thing Granddaddy brought home and back then Grammy said jesus ain’t fond of anything that happens after 10PM but we all knew she pulled thirteen trembling lives from her own body so there must have been more to this story swimming in her head whenever she tapped her finger to the sound of the calypso.


i know we all succumb to a rhythm at some point but perhaps i’m wrong. i’d play you some music from the homeland but i don’t want to be disappointed. i am here, anyway, saying what i have always known to be true: all roads lead to hell or a rapture. 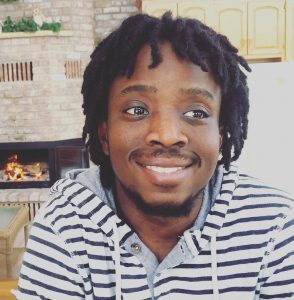 Bernard is a Bahamian immigrant poet still trying to plant his feet in Minnesota. He has work featured and upcoming in Mizna, The Rush, TRACK//FOUR, Third Point Press, and Button Poetry, among others. He owes a lot to all of his favorite poets. Ask him for a list