It was a nightmare in which disembodied girls spoke in
imaginary voices. They said, “It is winter everywhere inside
you,” then disappeared into the starcharts.

When the nurse took my pulse, she gave me a vial of ether
and a vial of honey then adjusted the roots of my gown.

I said neocortex then stroked the pony.

Shivering girls with cutting disorders were transfigured into
kings. We held a vigil for rust, a vigil for rocks and a vigil
for vegetables.

When I scattered my clothes on the roof of the stable, I
smashed the honey vial and one thousand landscapes of bees
swarmed above me.

When I smashed the vile of ether, I was resurrected into a
landscape of animal tracks and goose feathers. Live moths
were stitched into my crown.

Either I collapsed to the floor of my inner visions, or I was
reciting the names of birds. I said, my scars are a cemetery
of self abuse or else they are the ghosts of past
hospitalizations.

When I was performing my most daring knife trick, a blade
of jasmine formed a sequin of blood. Then I’d wake up
screaming of the violence of kitchens and vomiting between
the snow.

Now, when I can’t sleep, I count myself with the stars. Or I
move among the stables saying i can see every miracle.
Then I lie still until my animal body forms. 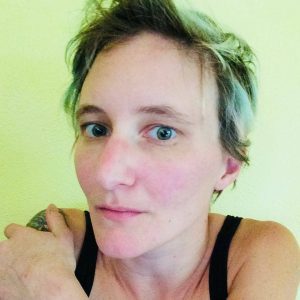 Sara Lefsyk lives in Colorado and is the managing editor of Trio House Press. She has recently started her own handmade zine of writing and art called Ethel. Her first book of poetry, We Are Hopelessly Small and Modern Birds, was published last year by Black Lawrence Press. Past publications include such places as Bateau, Phoebe, The New Orleans Review, The Greensboro Review and Poetry City, among others.