A month ago, I forgot some dough on my kitchen counter as I ran out of my house to deal with a family emergency. My family is now fine, but when I returned, I discovered the yeast had moldered and evolved agriculture, art, trade, and warfare.

No matter where I go in my house I can hear their voices. They want the war to end. The return of a friend. They want to save the day. They want to discover a secret treasure. So many want to get laid. They want their enemies and some of their friends to be smashed beneath a meteorite. They want to know why infants die, why bad things happen, why I’d make a world where evil exists.

I have no answers.

I never planned to be a deity.

At first, I tried to ignore them, but even with the TV on and a pillow over my head, I can’t escape the why, why, why, why.

Should I tell them the truth, their existence was an accident?

Should I just put that small world in the oven and finish my bread?

A Baker Not A Deity

Do not bake that bread.

If mold has grown to civilization,

it is long past edible.

And there is always some

whenever you make a mistake

it’s best to be honest,

admit your wrongs, but in the case

of accidently creating a sentient species,

I’m not sure the massive

such honesty would create

would be worth it.

Every time a god has spoken,

someone has found a way to twist

their words to justify a little

when they have little

After all, no god has ever

than a teenage couple,

who thinks jumping up

and down after sex

is a viable form of birth control.

creator had only planned

to make an omelet.

When she cracked open

the egg, the yolk transmuted

I can’t feed that to my kids!

and threw our universe

into the compost heap.

discover its own way. 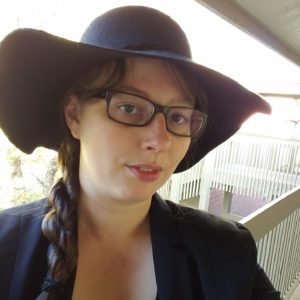 Jennifer Lynn Krohn was born and raised in Albuquerque, New Mexico, where she currently lives with her husband. She earned her MFA from the University of New Mexico, and she currently teaches English at Central New Mexico Community College. Jennifer is a member of the Dirt City Writers. She has published work in Necessary Fiction, Connotation Press, In the Garden of the Crow, Yellow Chair Review, and Gingerbread House Literary Magazine among others.