The first time I pray I stand next to a fish
alone in a pond at an off-season beach house
with an empty electronic food dispenser.
Waterline so low the lotus roots wave back.
The koi keeps scaring itself with its own fins,
sweeping the bottom of the shrinking pond.
I imagine it feels like a new angel, all gauze
and yaw. And when it leaps into the air
the first time, we both tread for a moment
in wonderment, two Os of mouth, gasping.
Better here than where we’ve been lately.
The psychiatrist at home put a name to it.
Called it despair. You’re inside despair,
she said. The second time the koi springs
from the water, a blue heron lands a stone’s
throw. How long since it stole the others?
When the whole siege of herons ambles up,
I search for a bucket. The best I can do is
the fish hammocked in my shirt. And there,
having just lost a baby, and against me
cradling an abandoned fish, surrounded by
beautiful birds no one ever sees up close,
I know this is a prayer. I call the koi Angel
but try to guess what its name really is
from the handwritten list on the fencepost: 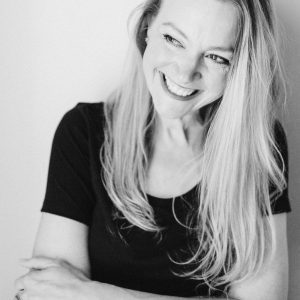 Kristin Robertson is the author of Surgical Wing (Alice James Books, 2017). Her poetry appears recently or is forthcoming in Ploughshares, The Threepenny Review, The Gettysburg Review, Harvard Review, and Prairie Schooner, among other journals. Winner of the Laux/Millar Poetry Prize, Kristin has received scholarships from the Sewanee Writers’ Conference and Squaw Valley. She lives in Nashville.